Know Everything About Richard Carpenter: His Career, Family & Net Worth

By LRU Writer | On: July 27, 2021
It had been a while since the famous American musician Richard was living away from the spotlight...But, his self-imposed exile ended in 2018, when he released a new album after more than three decades...While his sister, Karen Carpenter, isn't here anymore to complete the musical duo, Carpenters; Richard has included some of his sister's past works in the album... 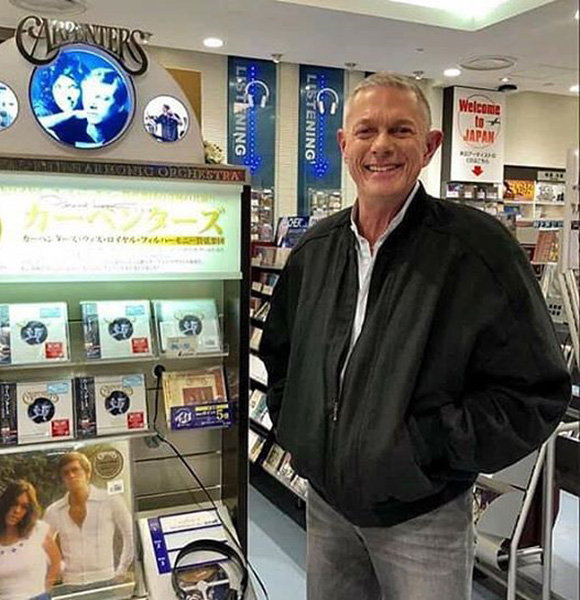 Richard Carpenter, the legendary American musician who came to fame as a member of the duo band, The Carpenters, has been out of the public light for quite some time.

Regardless, he can count on his family to be there for him whenever and however he needs them. Collin Paul Carpenter, his son, admires his father so much that he even decided to follow in his footsteps!

Does Collin Paul Carpenter Have His Own Band?

There was a time when Collin Paul Carpenter and his band, Finale, were on the verge of making their debut and charting. But, despite having the first album, Coming Soon, and great expectations of creating a reputation for themselves, Collin and his band couldn’t make it.

But it didn’t stop him. Instead, he appears to be having a wonderful time in his life, bonding with his friends and family, as seen by his Instagram posts. Furthermore, he appears to like traveling, as seen by his good bunch of vacation pictures. Besides that, it looks as if he has a career plan for himself as he seems to be a medical student, as seen by his uploads and bio on Instagram!

In any case, the Carpenters have a special bond. Just like his support for his own son, Richard Carpenter always had his parent's support when it came to his musical career and substance abuse in the past.

The Two-Member Band With Sister Comes To An End!

Richard Lynn Carpenter, age 47, among the most acclaimed singer-songwriters of all eras, is not the only musician in the Carpenter family. He and his sister Karen Carpenter have scored several songs together in the past.

Carpenter, the American musician, record producer, and songwriter, was born on October 15, 1946, at Grace-New Haven Hospital, New Haven, Connecticut. His sister, Karen Carpenter, was born in the same hospital was. Carpenter along with sister Karen and parents Harold and Agnes (Photo: Worldation.com)

After numerous failed attempts by both siblings to break into the music industry, the Carpenters placed a musical duo band in 1969.

The two recorded ten studio albums and numerous singles throughout their time as a band, including Top of the World, Only Yesterday, Superstar, Ticket to Ride, etc.

The duo's records have sold over 100 million copies over the years, but the band's popularity got the best of them, and they separated after fourteen years.

Another Death By Overdose:- Arzaylea, Age 23, Grieves Over Loss Of Boyfriend; Shares Their Adorable Moments

With his newfound fame, Richard became addicted to drugs. And Karen, his younger sister, battled anorexia throughout her teens.

To keep herself slim, she began using a medication called Ipecac, but it resulted in tons of adverse effects, eventually leading to her death on 4 February 1983 at the age of 32. Even though their dreams and hopes as a duo band ended in tragedy, Carpenter still had his parents Agnes and Harold, by his side.

A year after his sister's death, in 1984, Richard got married to Mary Rudolph (Carpenter), his first cousin. It generated some uproar, but because his wife was adopted, the marriage was never considered incest. What Is Richard Carpenter's Net Worth?

In the earlier days, Richard and his sister were known for turning a commercial theme tune, We've Only Just Begun, into an RIAA-certified Gold Record that charted at #2 on the Billboard Hot 100.

With such a track record of achievement, Richard Carpenter, who stands six feet tall, now offers his music online for his admirers to listen to and enjoy.

Similarly, the American artist has managed to build up a beautiful cozy mansion and has insane car collections due to his fame and notoriety. The 74-year-old singer has a $10 million net worth.