By LRU Writer | On: August 01, 2018
Victoria's Secret Angel and the former One Direction star closed their romantic chapter! Model Camille Rowe and the singer, Harry Styles called their relationship off after two weeks he completed his 89-date world tour. 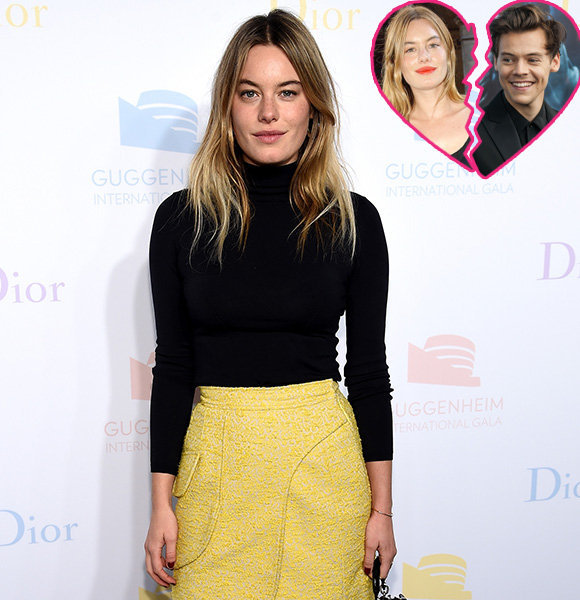 Victoria's Secret Angel and the former One Direction star closed their romantic chapter!

Model Camille Rowe and the singer, Harry Styles called their relationship off after two weeks he completed his 89-date world tour. Harry's rep has declined to comment and preferred to maintain silence on the matter.

However, the model had attended several of his performances before their story blossomed. Following their introduction, the lovebird started to date since August 2017. Also, the couple seemed very serious about their relationship as Harry was taking it more serious than his previous dating lives. First, it was Harry's longest relationship till date and the singer also introduced the 28-year-old model to his family in December 2017.

She had a friendly relationship with his family as she joined Harry's mother Anne Twist at his Paris concert in March 2018.

You May Also Like:- Tess Ward Has A Boyfriend; Dating Rumor With Harry Styles Turned True

Moreover, they appeared to have a good relationship until the final date of his tour in July 2018. Camille attended the tour's final date in July 2018 in Inglewood, California, where his another ex-brunette Kendall Jenner was also present.

Well, before the split news started to make a fuss, a question was raised on the Harry Style's sexuality after he admitted to being "gay." On the final show, which was dated to be two weeks of his split with the model, he hinted on his bi-sexuality and said:

While the couple has declined to talk about their split, it appeared that Camille's hectic modeling commitments and Harry's solo music success might be what kept them apart.

Shortly after the split, Camille has already moved on her life with Tarzan actor Alexander Skarsgård. A source stated that she was just a close friend of the 41-year-old actor, but after she finished her relationship with Harry, they started getting closer. They got so close that they have been dating now.

And Camille already has started to touch the limelight with the newly-build up romance with Alexander as they were spotted getting cozy on their basketball game date where she sat on his knee and were kissing each other.

Well, Camille moved on quickly to her dating games, as moving on is not a difficult task for the beautiful lady. Previously, she has dated musicians Andrew VanWyngarden and a Venezuelan-American folk singer, Devendra Banhart. Also, she was linked with the Hollywood's handsome vampire from Twilight, Robert Pattinson in 2013.

The model, who got married to fellow model Djuna Bel, also faced tragedy in her life as her boyfriend, pro-skateboarder Dylan Rieder, who she dated in 2014, died of Leukaemia in 2016.