By LRU Writer | On: September 20, 2019
Many might be unaware of Rico Rodriguez eye-raising net worth...learned a few tricks to keeping his dating life...gay talks...father was the owner of a tire shop named...his weight & height is listed as... 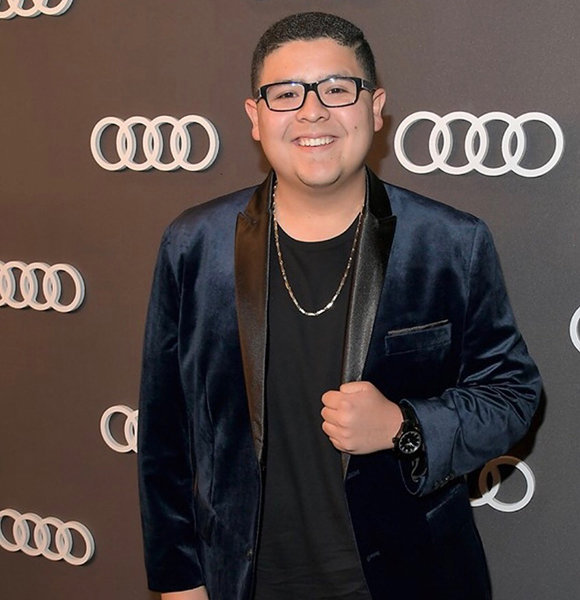 The Hollywood scenario is a tough one, as many personalities struggle with fame and fortune. On top of that, essential elements such as everyday privacy are stripped away due to the spotlight.

Thankfully, actor Rico Rodriguez managed to keep up a normal life even though he was involved in showbiz since his childhood. Moreover, he still managed to do well financially through his well-known projects.

He is undoubtedly well known to viewers worldwide through his portrayal of the character Manny Delgado in the hit series, Modern Family. But, many might be unaware of his jaw-dropping net worth and the personal elements of his life. So, let's take a look into some aspects of his life.

Just at the age of 21, the actor has been able to accumulate an impressive net worth of $12 million. And, it doesn't stop there as he receives a salary of $125 thousand per episode on Modern Family.

Interestingly, in 2017, the diverse cast of his show including Vergara, Bowen, and Ferguson received a raise in their salary to nearly $500,000 from their initial salary, i.e. $350,000 per episode. Although there weren't any reports about increment in Rico's salary, it's very probable that his salary also was increased as per the new contract.

After all, it is 2019 already, and the show is still on the air with a very committed fanbase. Moreover, Rico is a recurring actor in the series since his appearance in 2009. So, with almost a decade of his work in Modern Family, it won't come as a surprise that his net worth received a boost due to his success in the show.

Further, with the renewal of the show in coming years, it's evident he will be dancing all the way to the bank every year.

Born on 31st July 1998, Rico was raised in a working-class family. His father Roy Rodriguez was the owner of a tire shop named Rodriguez Tires; whereas, his mother Diane Rodriguez was a housewife. Unfortunately, his dad lost his life due to an illness in 2017.

Like for many children, his dad had a massive impact on him while growing up. And to honor him, Rico dedicated the season finale of that year's Modern Family to his beloved dad. As of now, Rico looks forward to his other members of his family. He has two brothers named Roy Jr Rodriguez and Ray Rodriguez. Likewise, his older sister Raini Rodriguez is a Disney Channel actress. She is mostly featured in the network's show titled Austin and Ally.

It appears that the young artist has already learned a few tricks to keep his dating life lowkey. Having worked alongside TV personalities for more than a decade, he seems to have taken on advice from them.

Already at the age of 21, there are still no rumors about his possible love affair or link with a girlfriend, let alone any gay gossips. While he could be single, he has often hinted about a girlfriend.

Rumored To Be Gay :- Jon Batiste Girlfriend, Is He Married Amid Gay Rumors? Answer's Here

In 2018, he posted a humorous vine-like clip citing,

"When bae likes one of your photos from 4 months ago"

Yup, he didn't disclose the name of his bae but seems he had something to express from his relationship, although not so important perhaps. Hopefully, his fans will get a sneak peek of his other half if he's still dating her.