By LRU Writer | On: October 24, 2019
RJ Barrett is one of the rising stars in the NBA... has been dating... do not shy away from showing their love...attended...father is former professional basketball...the godson of Former NBA Star...the most significant achievement in his career...pocketing an annual salary of... 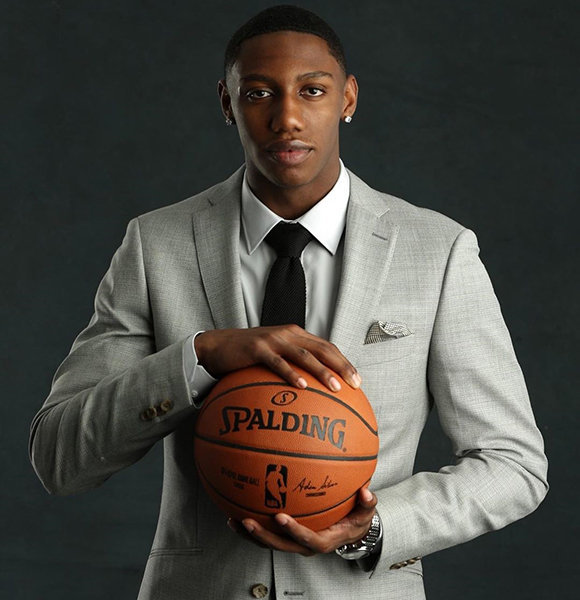 Canadian Basketball player, RJ Barrett, is one of the rising stars in the NBA. He made his debut in 2019 after being drafted by the New York Knicks.

Before his NBA debut, he played at Montverde Academy. Further, the young player also led his national team Canada to victory at the 2017 FIBA Under-19 World Cup and became the tournament's Most Valuable Player.

Who is RJ Barrett's Girlfriend?

Over a short time, the young athlete has gained massive fame and a huge fanbase. With his increasing popularity, there are curiosities regarding his dating affairs and relationships.

However, to his fan's dismay, RJ is not single at the moment. He has been dating a Canadian Basketball player named Hailey Brown. Just like RJ, his girlfriend also has an impressive record on the court. Both RJ and his girlfriend do not shy away from showing their love for each other through their social media. And, from their cute PDAs, the couple seems to be going pretty strong.

As for his education, RJ attended St. Marcellinus Secondary School in Toronto. But at the age of fifteen, he came to Florida and joined the Montverde Academy. At Montverde, he was named the Gatorade National Player of the Year and the Naismith Prep Player of the Year.

In addition to his parents, RJ is also the godson of Former NBA Star, Steve Nash.

Further, RJ also has a younger brother in his family - Nathan Barrett, who also happens to be a basketball player in the making

Nineteen years old RJ, who stands at the towering height of 6 feet 7 inches (2.0066 m), has reached quite an elevation in his career too.

The young athlete was named the National Player of the Year 2018-19 by USA Today. Since RJ has been playing from a very young age, he has set multiple records on his name. As a freshman, he broke the ACC freshman scoring record previously held by Georgia Tech’s star Kenny Anderson.

However, the most significant achievement in his career is being picked third overall in the 2019 NBA Draft by the New York Knicks. It marked his entry into commercial sports. He signed a two-year contract with Knicks at $13.37 million. According to the lucrative deal, he will be pocketing an annual salary of $ 6,524,900.

RJ's total wealth cannot be calculated yet, as the young athlete is just getting started. However, his net worth is likely to increase rapidly in the future.