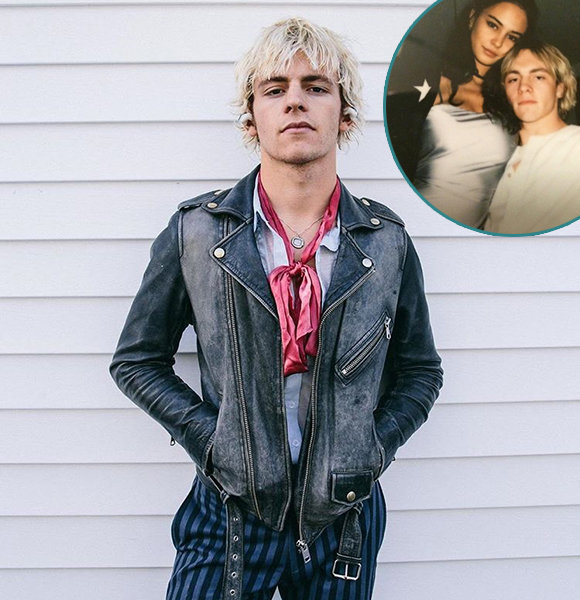 American singer, songwriter, musician, and actor Ross Lynch has written multi-talents all over him, taking over the entertainment industry and making a name for himself. He sure has ventured out on his roles on-screen, one being of a gay serial killer.

Being a sweetheart crush to his fans there is sure an uprising question about his sexuality and also his romantic life. Does he have a boyfriend? a girlfriend, perhaps? or is he just enjoying his singlehood? Let's get into it.

Who Is Ross Lynch's Girlfriend?

From working together on a project to falling for each other on the set, Ross is dating his girlfriend, Jaz Sinclair, also known as Jasmine Sinclair Sabino, who is a rising television actress.

The couple's first interaction was on the set of Chilling Adventures of Sabrina. Even though they have been hush about their relationship, they sure have filled their socials appreciating and uploading moments with each other.

From Ross doing Jaz's hair to going on trips together, the duo has equally blessed our for you pages with adorable snippets. The pair went official in 2020 and has been going strong since then.

Talking about his dating life, Lynch has been in relationships with some of the cutest and most gorgeous women to date.

Also From Austin & Ally: Calum Worthy Dating To Get Married! His Girlfriend Calls Him Weasley

Since Disney’s famous series Austin & Ally, Lynch was rumored to have some off-screen romance with the co-star Laura Marano. It turns out their excellent chemistry wasn’t just solely on TV but also in real life.

Next, the American singer was dating his Teen Beach Movie co-star, Maia Mitchell. The duo's romance made them one of the cutest couples on and off-screen.

However, the romance ended, and later in 2012, the singer was then rumored to have dated Morgan Larson, also from Teen Beach Movie, after being spotted hanging out and partying together.

The connection was undeniable, something interesting for the fans to throw their guesses at. After multiple rumors about multiple girlfriends, Lynch finally introduced to the world what was his next big relationship “Rourtney.” It was in the year 2015 when the young singer started giving clues about him dating the Australian model Courtney Eaton.

One of the most adorable clips he shared with the world was on Courtney’s birthday. The pair seemed to be intoxicated in love and shared their happy moment by hugging and carrying each other around.

As per the reports, the Mad Max: Fury Road actress later joined her ex-boyfriend together with his family and sibling at the Outdoor Classic. The pair was in a wonderful connection. It wasn’t until Lynch’s interview with the Entertainment Tonight Live where the singer gave an unsure answer while being asked about his relationship.

Read Also: Who is Dating to Laura Marano? Know About Her Past Boyfriend and Dating Life

After the uncertainty, the pair had their split and went in different directions. All thanks to his private nature, the actor-singer did not give an easy time to his followers keeping track of his love life previously. But, now the situation has changed immensely.

Just at the age of 26, he is a successful teen-idol musician with his family band R5 on his side, and with his ridiculous shift of Disney's lovable from Teen Beach Movie to a gay serial killer in My Friend Dahmer, he has proved his acting is on a different level!

With a supportive father who moved just for his children's dreams and having equally successful brothers and sister, Ross has stunned everybody with his pop-rock band R5, or showing off his aw-worthy performance in Disney’s Austin & Ally, the actor has been pulling off everything with excellence.

Now doing tours and having a happy and loving relationship, we cannot wait to update you guys more on Ross, so do stay with us!