By LRU Writer | On: May 26, 2019
Ryan Tubridy is an Irish TV and radio presenter...his parents come from a family with...Though Ryan Tubridy's exact net worth isn’t disclosed yet...Their wedding was held in Dublin... 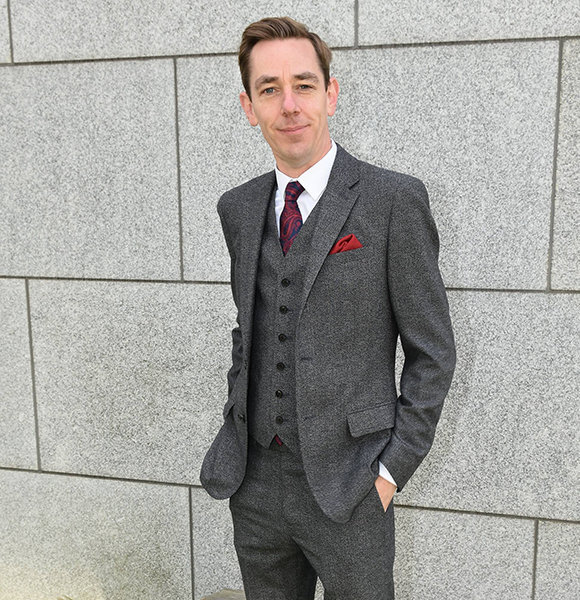 Ryan Tubridy is an Irish TV and radio presenter, notable for hosting The Late Late Show and the self-titled radio program The Ryan Tubridy Show. He started hosting radio shows at a young age of 12 on RTE radio network.

Apart from working as a host, he made appearances in a few films including Fir Bolg(2016) and wrote a book titled “JFK in Ireland.”

Born on 28th May 1973 on Dublin, Ireland, Ryan hails from a family and parents with a robust political background. His mother Catherine is the sister of Nail and David Andrews; Nail is a member of the European parliament while David Andrews is a former government minister.

Moreover, his aunt had close links with the Kennedy family in America while his grandfather was among the founding members of Fianna Fail, one of Irelands major political party.

Ryan Tubridy is the second youngest among his five siblings in the family.

He chose a career at Media instead of Politics. After finishing his college from University College of Dublin, he continued working at RTE Radio again.

In 2003, he married Anne Marie Power, a documentary maker, and producer at RTE.

Ryan had met Annie in a recording studio at RTE where they both worked. The pair already had a three a year old daughter named Ella, born in 2000, before their marriage to one another.

Their wedding was held in Dublin at a private garden of Ryans mother, with the twenties-themed reception and the presence of hundred and twenty guests.

You May Also Like :- Giacomo Gianniotti Wife, Wedding, Girlfriend

One year after their marriage, Ryan and his wife welcomed a second daughter, Julia. But, their marriage was shortlived. In 2006, the pair divorced citing the lack of love in their married life.

Though the pair parted ways, Ryan is very close to his daughters and spends quality time with them.

In 2009, Ryan Tubridy was dating Aoibhinn Ni Shuilleabhain, a broadcaster and Rose of Tralee winner. They had begun dating one another after Ryan had first interviewed her on his chat show. However, the pair parted ways four years later. Ryan Tubridy with girlfriend Aoibhinn Ni Shuilleabhain before their breakup in 2014 (Photo: her.ie)

Afterward, Ryan Tubridy was spotted spending time with a brunette in Kenmare during 2019 Easter. But, his spokesperson at RTE has neither denied nor confirmed that she is his new girlfriend.

Though Ryan Tubridy's exact net worth isn't known yet, he has managed to earn a massive amount of salary from his job at RTE as a presenter.