By LRU Writer | On: May 04, 2018
Not everyone flaunts their dating life openly in media; some people chose to be skeptical while some shares another level of comfort to talk about their relationship. British-Indian actress Sarita Choudhury belongs to both categories; she has categorized her off-screen dating life in low-key matters while she openly flaunted her on-screen life in her interviews. 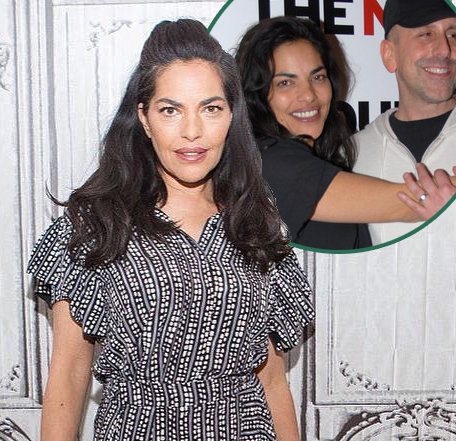 Not everyone flaunts their dating life openly in media; some people chose to be skeptical while some shares another level of comfort to talk about their relationship.

British-Indian actress Sarita Choudhury belongs to both categories; she has categorized her off-screen dating life in low-key matters while she openly flaunted her on-screen life in her interviews.

The 51-year old actress, who is married in real-life, has quoted her on-screen husband as her "Robert De Niro" in 2010.

Follow the whole story in the Sarita Choudhury's profile of love-life along with her bio-related information!

Sarita Chaudhary, born on 18 April 1966, is a married woman, who likes to keep her husband out of the spotlight. She insists on retaining her husband's identity low-profile as he does not contact whatsoever, besides having a famous wife.

In an interview with DNA India in 2010, The Perez Family star expressed her disinterest in not talking about her husband. She said,

“I don’t want to discuss about my husband here. Hope you do not mind that."

The Mississippi Masala actress, who shares a daughter Maria with her husband, did not disclose her wedding details but instead, revealed her spouse's profession. Sarita remarked,

"He is not from the industry at all! He is a war photographer and it is from him where my baby (her seven-year-old daughter Maria) gets her blonde hair from."

Later in September 2010, Sarita featured her daughter Maria, 14, in one of her interviews with DNA India. Talking about her daughter, Sarita didn't deny the fact that Marie could be an actress someday. Further, Sarita praised her daughter's acting skills and said,

“She is such an actress! I think she is more of the Bollywood type. All her teachers tell me that she loves to perform.”

The London native was previously in a relationship with actor Sam Rockwell, but their dating timeline remains unclear. Later, the pair broke up, and Sarita's ex-boyfriend claimed she was the one to get away, stating:

"Sarita (Sarita Choudhury) was the one that got away. She was amazing, really amazing. I loved Sarita. She was my pal."

Despite that, Sarita has not given her official statement towards her past relationship.

Sarita has her share of discomfort talking about her married life but seems to be open in regards to her onscreen romance. In an interview with DNA India in 2010, she was asked about her preference on Bollywood's on-screen husband.

She answered she would look compatible with the veteran actor, Naseeruddin Shah and expressed her desire to work again with Shah by quoting him as her "Robert De Niro."

“I think that I would look compatible with him. He (Naseeruddin Shah) is my Robert De Niro. I want to come back to India again and do a film with him”

The Homeland star talked about her initial experience working with Mandy Patinkin, who played her on-screen husband, Saul. In an interview with Charlotte Observer in 2013, Sarita said,

"Producers were looking for happy stuff, frolicking, laughing, (but) I was so shy. I had never met him, and suddenly we were put in a field, and we were just supposed to run and laugh. (But) he’s such a consummate professional – he just started singing and running, and I started laughing and was following him, and it was the easiest day ever.”

Sarita, who stands at the height of 5' 5" (1.65 m), shares relaxation talking her on-screen husband but contrary to that, she has still kept her real-life spouse's identity, still a mystery.