By LRU Writer | On: March 05, 2018
Sosie Bacon In Longterm Dating Affair With Boyfriend, Soon-To-Be Family? The American actress Sosie Bacon is known to the world for being the daughter of the famous Kavin Bacon and for her roles as Charlie Johnson in the television series 'The Closer,' and Skye in the hit Netflix series '13 Reasons Why.' However, there has not been much hum about her love life in the media as she has kept her personal life very low-key. 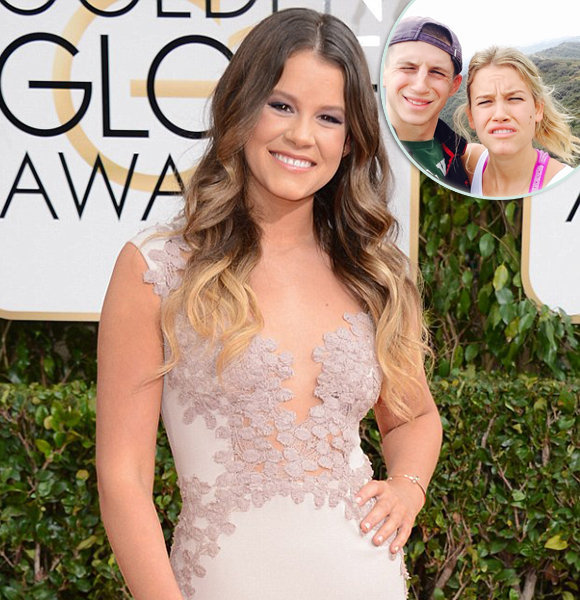 American actress Sosie Bacon is known to the world for being the daughter of the famous Kavin Bacon and for her roles as Charlie Johnson in the television series 'The Closer,' and Skye in the hit Netflix series '13 Reasons Why.' However, there has not been much hum about her love life in the media as she has kept her personal life very low-key.

So, today, let’s dwell on the personal life of this actress to find out her relationship status!

The beautiful Sosie Bacon seems to prefer hiding her love life behind the curtain. Anyways, there have been some speculations relating her affair due to the frequent posts on her social media account featuring a particular guy.

The adorable pictures Sosie has been uploading on her Instagram account hints that she is possibly in a relationship. But still, the identity of the person with whom she is seen together a lot of times has not surfaced out in the media. So, it's not sure if she is really in a dating relationship or not.

Moreover, if the timeline of Sosie's social media is observed, it is clear that the duos started posting their together clicked pictures since 2014. Back in the year, Sosie uploaded a photo where she and her possible boyfriend can be seen along at the Dodger Stadium in Los Angeles. Hence, the pairs are evidently together for almost more than three long years.

Further, the pictures Sosie uploads not only shows that she has a good relationship with the man but also hints that they spend quality time together. Previously on May 16, 2016,  Sosie took the weird face of her and her probable partner to Instagram and indicated that they were out in the Temescal Canyon for hiking.

Also, on December 23, 2017, Sosie Instagrammed a picture with him and said that she loves traveling with him.

I love traveling with this . He complains way less than me, he always holds the passports and never loses them(cause I would), and he is very very patient! I am a very lucky .

Though Sosie has not been vocal about her love status, she looks adorable with the man who could be her long-term boyfriend and an eligible partner to add to her family. Alas, she loves being tight-lipped regarding her personal life.

Anyway, it would be pleasuring, for all her fans and followers if, Sosie herself, revealed more about her relationship status and her boyfriend.

The beautiful American actress Sosie Bacon was born on 15th March 1992, to a family with A-list parents, father Kevin Bacon, and mother, Kyra Sedgwick. Sosie is the second child of her parents and has an older brother named Travis Bacon, who is as famous as her for being the actor and composer, for 'Loverboy (2005)' and 'Story of a Girl (2017)' respectively.

Sosie who ages 25 at the current date, debuted through the movie 'Loverboy' directed by her father, Kevin, where she acted alongside her family members: her mother and brother.

Moreover, Sosie as well was chosen as the 'Miss Golden Globe 2014' by the Hollywood Foreign Press Association. And in 2017, she joined the Netflix's American web Series, '13 Reasons Why' as Skye.

Sosie also starred on her mother's first directing debut "Story of a Girl" that got released on June 22, 2017. Apparently, Sosie will feature on the HBO's new TV drama serial 'Here & Now,' this year.

Well, with the acting passion and ascending number of projects, Sosie looks to be working slowly on building up her acting résumé and career. Moreover, as for now, Sosie Bacon has already accumulated a total net worth of $250 thousand.

American Actress The Closer Charlie Johnson Story of a Girl