By LRU Writer | On: March 25, 2019
It’s always a dream of everyone to have a blissful married life and a family that always stays together. Well, it looks life Kit Hoover who is the correspondent and co-hosts Access Hollywood Live alongside Natalie Morales has already found her way around to all thing we just discussed.

It’s always a dream of everyone to have a blissful married life and a family that always stays together. Well, it looks life Kit Hoover who is the correspondent and co-hosts Access Hollywood Live alongside Natalie Morales has already found her way around to all thing we just discussed. Let’s know about her personal life more thoroughly.

Kit Hoover is married to Crowley Sullivan and resides in Los Angeles with their 3 children.

The couple tied to know in a beautiful ceremony on 21st August 1999 and built a happy life. Kit and her husband dates a while before tying the knot, their courtship can be dated back to 1995.

Well, the man who managed to steal the journalist's heart is undoubtedly a talented guy.

Why do we think her husband is talented? It is because of the various work he has done that has won him Peabody award and two Emmy awards. Kit Hoover’s husband is a sports and entertainment multimedia veteran with over one and a half decade long experience. 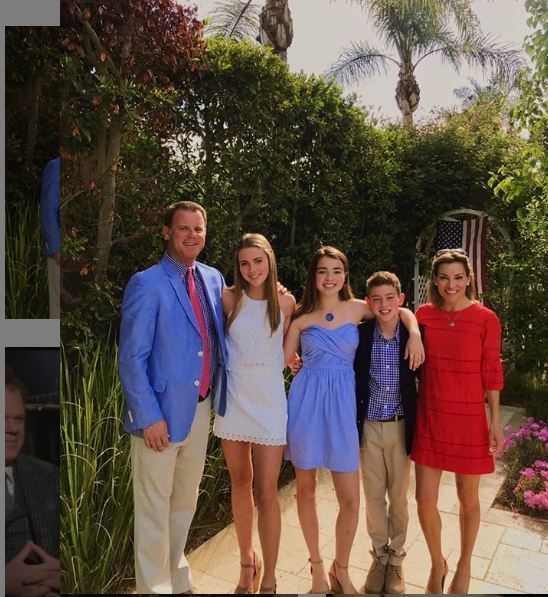 Sullivan is a Michigan State University graduate who currently works as an executive vice president, planning/general manager for sports at MandtVR. He has also worked at ESPN as a vice president, Programming & Acquisitions, director, producer, and associate producer.

The University of North Carolina graduate Hoover and her husband are blessed with three children. Two daughters named Hayes and Campbell and a son who has been given his father’s name i.e. Crowley Sullivan. They all have the good looks of their parents.

On Her Love For Running

While most people hate running, Kit is an exception in this regard. She loves running which is therapeutic for her.

It started when she was eight years old. Initially, she started running to spend time with her father. But slowly she began loving the sport. Well, she used to take part in races along with her father and brother. It became an important part of her life which she followed up in her college life and the time after her graduation.

Today, running is a very precious part of her daily routine. A working mother, she likes the flexibility of running and the time it gives to process her thoughts. Well, the journalist managed to instill running culture in her family as her children also enjoy the sport.

1970, July 29 born Kit Hoover has been working is the television industry since before 1995, with her first job as a cast member on the inaugural season of Road Rules: the USA- The First Adventure.

Prior to that she was also was featured on American Journal, concentrating on entertainment stories. Later in 1998, she joined the Fox News as a correspondent for Fox Files and later hosted "Fox Rules with Kit Hoover." In 2003, Hoover joined the ESPN network to host a live morning show called "Cold Pizza."

With all these works over the past years, Kit Hoover has been gracefully gathering fortune for herself. She might have a big figure salary. Otherwise, it would not have been possible, to sum up, a massive net worth of $3 million.