By LRU Writer | On: January 25, 2021
Natalie Morales, as we’re discussing today, is an American journalist, co-anchor on the popular news show ‘Today’, and a co-host at third hour at the NBC. Besides being professionally active, she is a woman married long ago, with the responsibility of two children on her shoulders.

You remember the Today Show News Anchor Natalie Morales, right? The one with the beautiful smile? Oh, you remember a little. That is entirely fine because we will fill up the gaps for you. Today we will be gathering as much information as we can to address the gaps.

Natalie Morales, as we’re discussing today, is an American journalist, co-anchor on the popular news show ‘Today’, and co-host at third hour at the NBC. Recently, she has also been fulfilling dual duties for Access Hollywood.  Besides being professionally active, she is a woman who married long ago. She also has the responsibility of two children on her shoulders.

Here, we endeavor to unravel some important parts of her life–her children, husband, rumors and more. 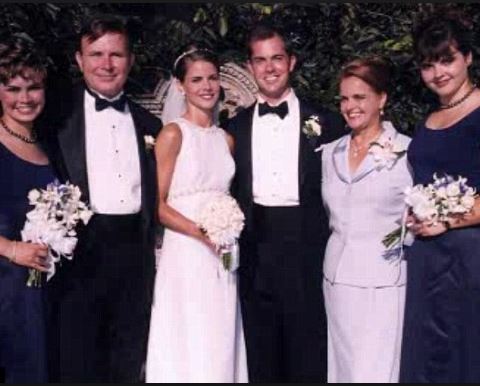 Caption: Natalie Morales with husband Joe Rhodes along with parents and bridesmaid. They have been married for eighteen years now

About after six years of a marriage relationship with Joe, Morales conceived her first baby in 2004 whom they named Joseph Stockton Rhodes. It comes as no surprise that Joe might have derived the name of his company, Stockton Road Capital LLC,  from his first son's name

Later, on 9th  September 2008, they were graced with a baby boy again whom they called Luke Hudson Rhodes. Caption: The happy husband and wife with their two sons enjoying the ocean view

Loss of a Child:

She is a happy mother now, but merriment is not all she got in her life. Before the birth of their two sons, she had had to deal with something very tragic; loss of a child due to miscarriage.

Here we have a video where she got emotional while talking about her unsuccessful pregnancy.

What About the Rumors With Matt Lauer, Are They all True?

Rumors, spreading like wildfire, had found it’s victim in Natalie long ago. In the year 2006, Natalie was rumored to having an affair with NBC’s Today show host, Matt Lauer. Words had been that the two of them got involved during the Today show coverage of 2006 Winter Olympics in Torino, Italy – this also had led Lauer’s wife to file a divorce against him which she withdrew later. Furthermore, a deadlier rumor was awaiting her in the years to come.

Two years later, another rumor struck after when Natalie announced that she was 12 weeks pregnant. Rumor was that Matt Lauer was the father to Natalie’s unborn child, instead of her husband, Joe. In April 2012, Celebitchy did postulate this rumor, but it was not verified.

These rumors sustained ripple effects. Later in 2012, Matt's wife, Annette Roque allegedly threatened him if he insisted NBC bosses to get Natalie in Ann Curry’s replacement. Then, Annette was reportedly on the brink of divorcing Matt.

On the other hand, it was also believed that Natalie was threatening to quit if she didn’t get Ann’s job. Subsequently, Savannah Guthrie was put on Ann’s job.

Despite the rumors hovering over Natalie and Matt, both are still together with their respective partners. Natalie is currently living happily in Hoboken, New Jersey with her husband-Joe, two children, and a rescue dog. News about her divorce with Joe no longer echoes.

Furthermore, according to numerous sources, both Matt, and Natalie have denied the affair rumors.

Tabloids were busy covering the tale of NBC’s The Today Show newsreader Natalie Morales taking up anchoring duties at “Access Hollywood” and "Access Hollywood Live". Here's what NBC producer commented on the story.

"Natalie will now co-host the Access Hollywood Shows while still serving as a West Coast correspondent for Today. She’s already been sending an increased amount of time in L.A. doing work for Today, and with Billy Bush, 44, leaving Access Hollywood, it’s the perfect time for her to take over."

However, as a matter of fact, she has now replaced Billy Bush to host the Access Hollywood and Access Hollywood Live and in addition to that Los Angeles where she became TODAY Show West Coast anchor and as she moved there, she sold her Hoboken Townhouse in $3.1 million and bought a $6.8 million dollars worth lavish home in Brentwood. This expense might question her income but she clears it off with a massive net worth of $8.5 million dollars.

We’d like to conclude with a video of February 14, 2014, when Natalie Morales along with Savannah Guthrie and Jenna Bush Hager received a very sweet Valentine wishes from their respective partners while the three ladies were away in Sochi for the Olympics. Nothing could get more adorable and cuter than this.

Born on June 6, 1972, Natalie Morales is currently forty-four years old. Natalie graduated from Rutgers University with a degree in Bachelor of Arts, and she was also a member of Phi Beta Kappa and graduated Summa come Laude. Natalie’s first job was at Chase Bank in New York from where she later moved to become a reporter/anchor for WVIT-TV at Hartford.