By LRU Writer | On: October 28, 2018
At one point in time, Socialite Tila Tequila, age... she can find solace in knowing that she has much to look forward to regarding raising baby daughters with her husband...the birth of her second daughter, Anabella, six months later means...Her lesbian romance with Casey Johnson - the heir to Johnson & Johnson fortune - was... 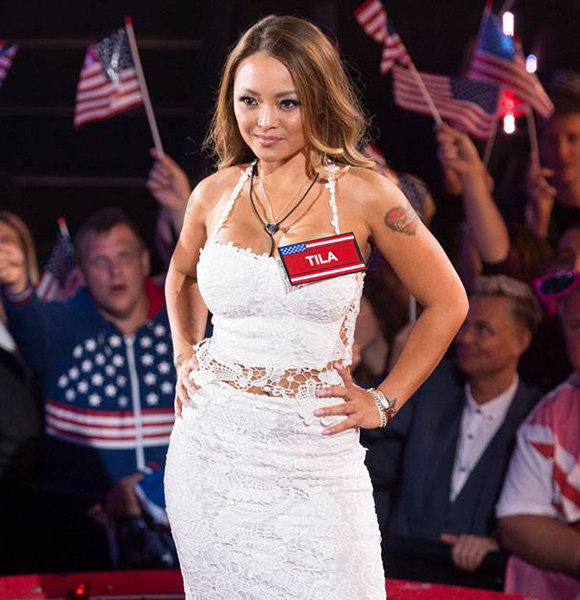 At one point in time, Socialite Tila Tequila, age 37, was the most followed person in all of the social media platforms. Her rise to fame as a reality star and everything that ensued after that makes for a compelling anthropological case study.

As much as she is revered for pioneering the blueprint for today's internet shabby stars, the former MTV reality will be best remembered for her unabashed personality during her legendary TV stints -- one that is exemplified by the fact that Tila was an openly lesbian public figure.

Although the Singapore native may never reach similar heights, she can find solace in knowing that she has much to look forward to regarding raising baby daughters with her husband.

Her pregnancy revelation in March 2018 and the birth of her second daughter, Anabella, six months later means a new chapter awaits for the Surviving Nugent start.

Tila revelation comes just a month after she had her husband had officially tied the knot.

Socialite In Our Vault:- Has Keyshia Ka’Oir Already Turned Her Boyfriend Into A Husband? Surgery And Kids Rumor Swirling But How True Are They?

With her pregnancy announcement, Tila managed to kill two birds with just one stone. Not only did she clap backed at her "haters," but also revealed that she and her yet-to-be-named husband were expecting a baby. On her March 2018 Facebook post, the former reality star wrote:

"The Lord God has blessed me with baby #2!!!!! Praise the Father in Heaven for He is merciful and graceful! I give glory to Him every day."  Meanwhile, I find it hilarious how all the haters have been calling me ‘fat' and telling me that God is going to punish me..."

Of all people, Isabella - Tila's first baby daughter - seemed the happiest with the news, claimed the A Shot at Love with Tila Tequila star.

"Now Isabella will finally get to be a big sister! She is so, so excited and kisses my belly every day talking to her baby sibling! It is the sweetest thing ever!"

Not everybody is eager about Tila becoming a mother for the second time. Tila's former partner and Isabella's biological father, Thomas Whitaker - a struggling musician - has accused the former MTV reality star of "child neglect."

Discover:- Susan Mikula Wiki: From Age, Net Worth To Relationship With Rachel Maddow

Responding to her former partner's claims, Tila released a statement accusing him of being a jealous ex. An excerpt from her response reads:

"Thomas is just jealous that I got married and recently had another beautiful baby girl with someone else."

Interesting enough, this wasn't the first time Tila had gone at the word of wars with her former partners.

Accused Of Cashing In On Lesbian Partner's Death

Suffice to say that Tia hasn't had greatest of lucks in the love front!

Some of her previous relationships came to a violent end; case in point -- her brief bling with then-San Diego Linebacker Shawne Merriman in 2009. Following her hospitalization resulting from a physical dispute between the two, Tila sued Shawne for $1.5 million.

A few weeks later, her former boyfriend countersued and won $2 million lawsuits by a default judgment. Amidst the ensuing legal battle, Tila was making headlines for a different reason. Tila and her former lesbian partner, Casey at an industry event (Photo:- dailymail.co.uk)

Her lesbian romance with Casey Johnson - the heir to Johnson & Johnson fortune - was turning heads. The former lesbian lovers were engaged for a month before Casey's untimely passing in January of 2010 because of complications resulting from diabetes.

Then 28-year-old Tila took to Twitter to break the news of Casey's death. As expected, a host of people including blogs and friends close to Casey slammed her for capitalizing on her dead lover's death.

Jasmine Lennard, an associate of Casey, sent out a tweet bashing Tila. It read:

'You NEVER even knew her. You enabled her death and prevented her getting the help she SO DESPERATELY needed for YOUR OWN selfish purposes."

The East Coast-based blog Gawker one-upped Jasmine's remarks by dubbing Tila as "the most desperate attention-starved slug that the Celebrity Industrial Complex has ever spewed forth from its cogs."

About nine years after Casey's death, the Welcome to the Dark side songstress denounced her lesbian past and claimed that she only pretended to be one to boost TV ratings.