By LRU Writer | On: August 23, 2019
Todd Gurley is a running back for... One of the best running backs... has been tied with alleged girlfriend since 2014... no confirmation about relationship... recently signed a new contract... 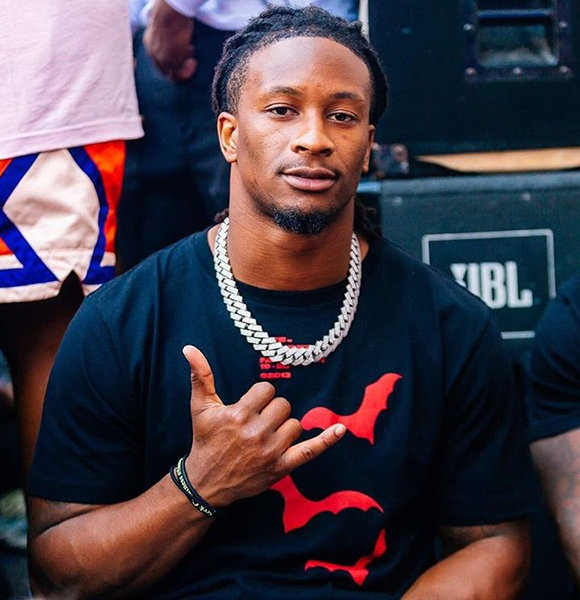 Dubbed the NFL Offensive Player Of The Year in 2017, Todd Gurley is a household name in American football.

Often compared to legends like Jim Brown and Herschel Walker for his blistering pace, agility, power, and vision, Todd is an uprising footballer.

He is affiliated to Los Angeles Rams as of 2019 and has shown some talents in the field.

Todd Gurley was born on 3 August 1994 in Baltimore, Maryland. He is one of the six children of his parents: Todd Gerome Gurley and Darlene Simmons. In his family, the athlete has four brothers, namely Shannon, Princeton, Davon & Tarik Gurley, and sister called Devin.

Named after his father, Todd prefers to be called “Todd Gurley II (second)” rather than “Junior.” So, the name on his jersey reads “Gurley II.”

The player of height six feet one inch tall (1.85m) and weight 101 kgs is close to his family despite his busy schedule. He even took part in Steve Harvey’s show Celebrity Family Feud with his family members in 2018.

Married? Who Is His Wife/Girlfriend?

Todd often focuses on keeping his personal life out of the limelight. However, rumors of him dating businesswoman Olivia Davison surfaced earlier in 2014.

It is quite surprising that the two were linked together for a significant amount of time, but never confirmed to their relationship. The alleged pair also never posted anything on social media that would verify them as boyfriend-girlfriend.

The two were seen together on different occasions starting in 2014, which gave rise to the romance rumors. However, Todd and his alleged wife-prospect haven’t been spotted together since the 2016 launch party for Gears of War 4.

Whether the two never dated or have been keeping it lowkey will always be a question among the fans. But, as of 2019, Todd is reportedly unmarried and still searching for a lovely wife to settle down.

Considered the NFL’s most ideal running back by many, Todd has a career to flaunt.

At 25 years of age, he is considered as one of the best players to ever play at the running back position.

However, he was already in the spotlight right as a freshman at the University of Georgia, where he became the second freshman in the school’s history to rush a 1000 yards.

A list of honors followed for Todd, including being named Freshman All-American, NFL Offensive Rookie Of The Year, and NFL Pro Bowl in 2015.

His stellar performances for the Los Angeles Rams saw him land a substantial 4-year contract worth $60 million in 2019. Of the $60 million, $45 million is guaranteed.

He was previously valued at $4 million. But, as the recent contract saw an increase in his salary, including a $21 million signing bonus, Todd's net worth has increased substantially.