By LRU Writer | On: October 03, 2018
Tom Ashbrook, who formerly hosted public radio call-in program On Point, was once married. He was married to...and even shared...children with her. But he tragically lost his wife to...years later, the wedding bells rang for him again after he married...his second wife back in...at... 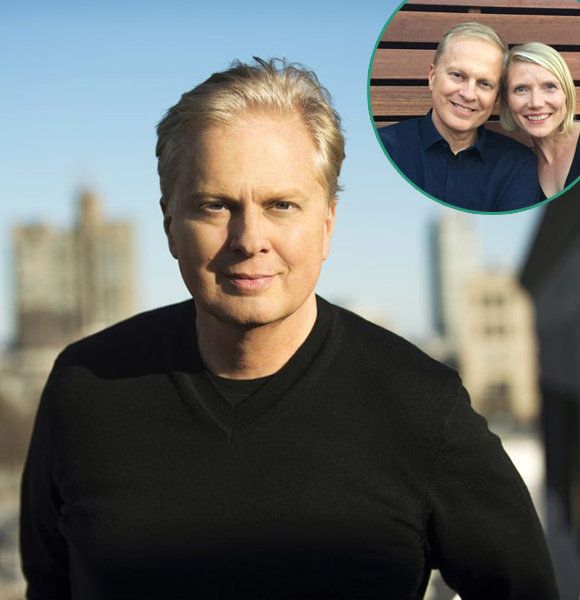 American journalist, Tom Ashbrook, who is also a radio broadcaster, formerly hosted public radio call-in program On Point. But his 16 years of commitment to the show came to an end after he was fired from the show due to accusations from his co-workers.

Apart from his journalism career, he faced heartbreaking moments in his love life as well. He lost his first wife to cancer after sharing years of marital bond with her. However, he did not give up and gave love another chance which led him to marry his current wife with whom he now shares a happy family life.

Tom Ashbrook, who was a foreign correspondent in Asia, was previously married to Danielle Guichard-Ashbrook, who was the Associate Dean and Director of the International Students Office at MIT.

They were married for years and even shares three children together. Their romance came to an end after Danielle lost her battle with cancer back in November 2014. She died in their Newton home while having her family by her side.

The news of her demise came just a day after Tom announced his extended leave from his show On Point.

However, despite the loss, Tom did not give up on love and soon he crossed path with his current wife Cathryn Clüver, who is a Harvard Kennedy School faculty member. The pair actually met in Cambridge, Mass back in March 2016 after she tweeted Tom regarding one of his show. Tom, who had an average salary of  $52,000, noticed the tweet and suggested to meet over lunch while discussing the topic which marked the beginning of their romance.

Their budding romance turned into lifelong love in no time. Less than 17 months later on 17 June 2018, the pair exchanged their wedding vows in Lincoln, Mass. Patricia Clifford.

Their wedding was even featured in The New York Times‘s weddings section and since then they have going strong with their relationship despite the issues in Tom's career.

Tom Ashbrook hosted One Point for almost 16 years during the course of his career. But he was recently fired from the program after he was accused of creating an abusive work environment by his co-worker.

He was placed on leave since December 2017 after the former employes filed complaints of sexual misconduct and bullying against him during the course of the past 10 years.

After the internal review by Boston University, the claims by these 11 former employees were confirmed, he was fired by Boston station WBUR-FM which resulted in him losing the syndicated radio show On Point.

Read also: Travel Guide Writer Rick Steves Ended The Relationship With His Wife, Anne Steves in 2010. The Reason Behind the Divorce?

The decision came as a big blow and utter disappointment for Tom to which he responded with a statement writing,

“deeply disappointed by this decision, which I believe is profoundly unfair both to me and the listeners who are been such a part of On Point.”

Adding to it, he also enquired for a way back to the show asking Boston for a second chance to redeem himself after being deposed from his successful WBUR show.

However, now, he has kicked off with a new media project bring him back into the game. His new show is the online interviews which he calls “Conversations,” that are posted on the website ashbrookinterviews.com. He has already published over five episodes and is on his pathway to earn massive net worth.