Openly Gay Troye Sivan Dating Status In 2020, Who Is His Boyfriend?

By LRU Writer | On: January 15, 2020
Troye Sivan is a singer who originally started his career as a YouTuber...he came out as gay in...The singer is dating his long-term boyfriend...his boyfriend is a model by profession...they first met at...birthday on 5th June...at the age of...and his height extends to 5 feet 8½ inches (1.74 meters)...enjoys a net worth of...wrote the song on the relationship... 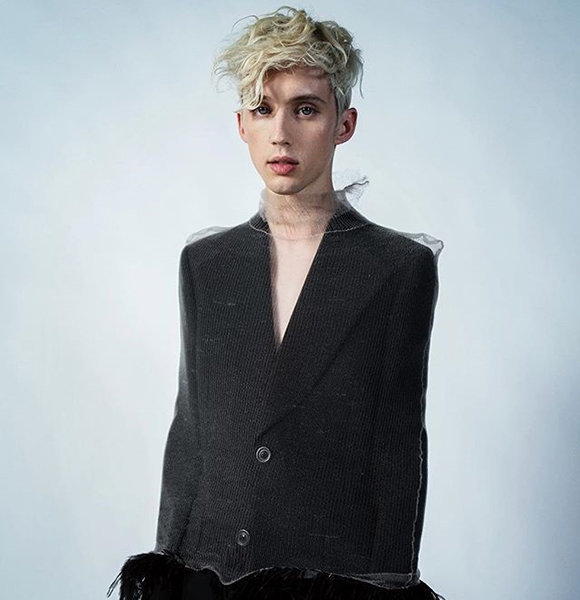 Famous singer Troye Sivan initially started his career as a YouTuber at the age of twelve. He later earned a Teen Choice Award for the Most Popular Web Collaboration in 2014, for his video with fellow YouTuber Tyler Oakley, titled The Boyfriend Tag.

As a singer, he has released two EPs called TRXYE and WILD in 2014 and 2015, respectively. The singer also dropped an album called Blue Neighbourhood on 4th December 2015.

In addition to YouTube and his singing career, Troye's acting debut came in 2009 with the movie, X-Men Origins: Wolverine, in which he portrayed the young Hugh Jackman. He further went on to star in Spud (2010) and its sequel, Spud 2: The Madness Continues (2013).

The YouTuber-turned-singer came out as gay in 2013; he revealed his sexuality through the YouTube video- Coming Out- posted on his channel on 17th August 2013.

Another Openly Gay Celebrity:- Ben Whishaw Is Openly Gay, His Relationship With Husband

However, Troye had already come out to his family when he was 15 years old.

In an interview with Harper’s Bazaar in October 2019, the My My My! singer shared his experience about realizing his sexuality; he elaborated on how growing up in a society where he didn’t want to be gay for the first 15 years of his life was terrifying.

The Strawberries and Cigarettes singer has been dating model Jacob Bixenman since 2016. The pair first met at a fashion show, and they have been in a long-term relationship for nearly four years now.

However, back in January 2019, the rumors of their split started going around when Troye posted a picture of himself together with singer Lauv, on his Instagram account.

But the breakup rumors were soon dismissed as Troye and Jacob celebrated their three years anniversary as a couple on 11th February 2019.

Jacob is a model who is originally from Orange County, California.

He attended the University of Southern California and graduated with a degree in English.

More About Troye Sivan's Boyfriend:- Jacob Bixenman Not Shy Of His Gay Sexuality With Boyfriend Troye Sivan! An Ideal For Others?

The model is now represented by Ford Models & IMG, and he is also pretty famous on Instagram, with more than 650K followers rooting for him.

Troye was rumored to be dating American YouTuber Connor Franta in 2014.

Although not much information is revealed about their relationship, it is speculated that Troye wrote the song, The Good Side (2018), talking about his relationship with Connor.