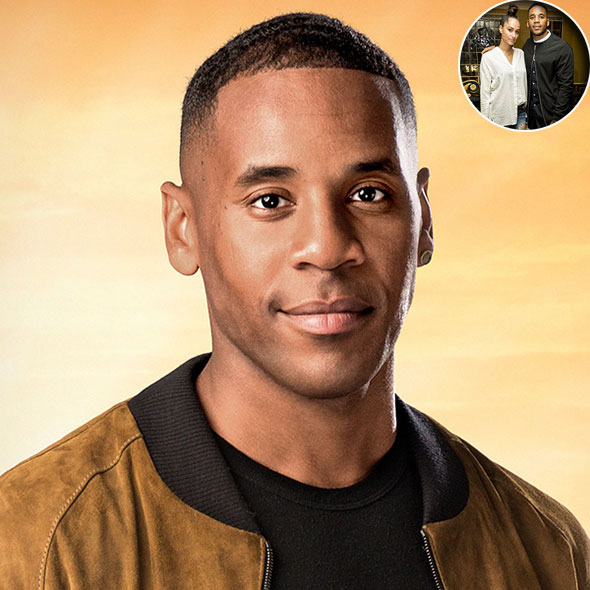 You meet different people in your day-to-day life. Not every person you meet shares the same opinion as you, and they might not love to live life the way you wish. Likewise, there are many cases where a person finds another person imperfect to spend their whole life together.

Well, the British television presenter Reggie Yates knows about it better. He ended his relationship with his soon-to-be wife after being together for around four years. Aren't you interested to see the relationship that they shared? We will help you to have a glance at their affair and separation.

In 2012, Reggie first revealed his relationship with model Tia Ward. He has been spotted cuddling and kissing his girlfriend on holiday in Saint Tropez. Reggie and possible wife Tia spent some quality time together in the south of France in 2012 (Source: dailymail.co.uk)

The couple took their relationship a step forward by getting engaged in 2015 during a romantic New Year getaway to Rio de Janeiro, Brazil. At the National Television Awards in London, Reggie spoke to DailyMail about the engagement in Jan 2015. He said:-

“It's nice. It's exciting stuff. It took forever, and it was emotional... She was very happy. So I did just right for her... It's all come together perfectly.”

Reggie, who is not a gay man, revealed that he was planning to propose to her for six months.

''I found the stone for and then designed the setting for it... It's beautiful and it's right for her. It's not a yellow diamond It's in a gold setting so in certain light it looks yellow.'' Later, Hello mag also congratulated Reggie and his soon-to-be wife for their engagement through a Twitter post.

In September 2015, he opened up with Mirror about his future planning with his would-be wife, Tia. He said:-

"We're trying to figure it out. We're getting so little done at the moment it's unbelievable because we're both so busy.But we have our eye on a venue and we're eyeing up suits and dresses and it's all coming together. It's a lot of work, way more than I thought it would be, but we're excited. It's weird because you still sort of feel like a kid and all of a sudden you're having very adult conversations. It's weirding me out a bit but it's all good.”

Reggie Yates and Tia Ward, who also runs a travel and fashion blog, are now separated before they got married. Reggie admitted to Mirror in February 2016 that the wedding was "weirding out."

According to the Mirror, a source told The Sun newspaper that the pressure of organizing the wedding played a factor in their split.

Almost three years have passed since Reggie announced his split with his girlfriend turned wife prospect, Tia, but the dark clouds surrounding their fallout still hover above his head. Either that or he's just unlucky connecting with his love interests.

The absence of his dating life has caused many to ask, 'Is Reggie Yates gay?'

Well, the TV presenter has completely ignored his gay rumors and hardly talks about his relationship.

However, in March 2018 interview with The Guardian, the 39-year-old BBC personality lamented on his singlehood, quipping:-

"Ha! I live alone. It’s hard when you work as much as I do, it’s not conducive to dating. I have late-night romantic dinners with my laptop."

In an interview with the same publication, Reggie opened up about his eagerness to welcome children in his life. According to him, having children would improve his quality of life by tenfold. Moreover, Reggie wouldn't have a problem holding a child with his huge net worth.

Read Also:- Melissa McBride Secretly Married Or Is On The Gay Side? All You Need To Know About Her

Similarly, he is popular for his work at the BBC on both television and radio. He is known for presenting a show for BBC Radio 1 with Fearne Cotton and  BBC One game show 'Prized Apart' with Emma Willis. Likewise, he is also known for presenting the ITV2 reality show 'Release the Hounds.'

In the show, Reggie uncovered many facts concerning the behavior of religions toward gay and transgender people. The documentary demonstrates how the Asian and Black communities are less likely to accept LGBT+ people. His show helped many people to open their eyes and discuss their issues seriously.

Reggie undoubtedly has a significant impact on society.

Reggie is single now and might be searching for a wife-like partner. Nevertheless, his career is as awesome as his net worth. According to Celebrity Net Worth, Reggie has a whopping $3 million net worth.