By LRU Writer | On: February 13, 2020
Tyrann Mathieu is a Super Bowl LIV winner with the Kansas City Chiefs...is about to marry his girlfriend and fiancee Sydni Paige...has two children with her...was dating Megan Edwards and had a son with her...parents abandoned him when he was little...grew up with his uncle...his age is...his height is... 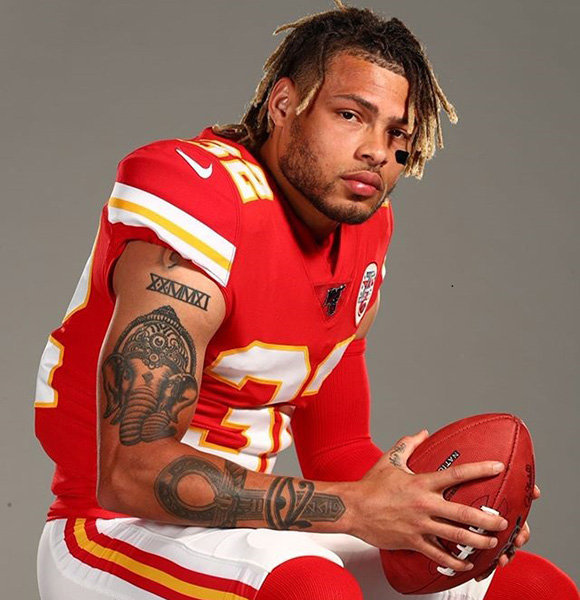 Tyrann Mathieu is the winner of the Super Bowl LIV with Kansas City Chiefs. He won the title on the 2nd of February 2020, playing against the San Francisco 49ers in a game that ended 31-20.

Tyrann was the Arizona Cardinals' 69th overall pick in the third round during the 2013 NFL Draft. He made his debut for the Cardinals during the opening game of the 2013 regular NFL season against St. Lous Rams.

Since his debut, Tyrann has gone on to play 98 games in his career, which includes 16 games each for the Houston Texans and Kansas City Chiefs. He has recorded 472 tackles during his career, among which 416 are solo tackles, and 56 are assists.

Tyrann is in a relationship with Sydni Paige Russell. They met while attending Lousiana State University. At the time, in 2011, Sydni was majoring in Journalism at the university.

Before her graduation, the couple had a child. Their first-born, son Tyrann Jr. was born on the 4th of June of 2014. After a few years of the birth of their son, in mid-May 2019, Tyrann proposed his then-girlfriend Sydni with a ring that is worth around $250 thousand.

And, in November of 2019, their second child, daughter Mila Jill Marie Mathieu was born. The engaged couple now lives with their kids in Kansas.

Tyrann dated Megan Edwards in the past. He also has a kid from the relationship, son Noah, who was born in 2013.

Tyrann was born to Darrin Hayes and Tyra Mathieu. His father reportedly killed a man in cold blood when Mathieu was only two. His mother abandoned him at birth. His relatives raised Tyrann.

Initially, his grandparents, Marie Spellman-Mathieu and Lorenzo, took him in. However, they couldn't stay around for long as Marie succumbed to strokes at age 75, and Lorenzo, who was a heroin addict, died because of heart failure.

After his grandparents' death, his uncle, Tyrone Mathieu, took him. Tyrann finally found a permanent home with Tyrone and his wife, Sheila, a registered nurse.