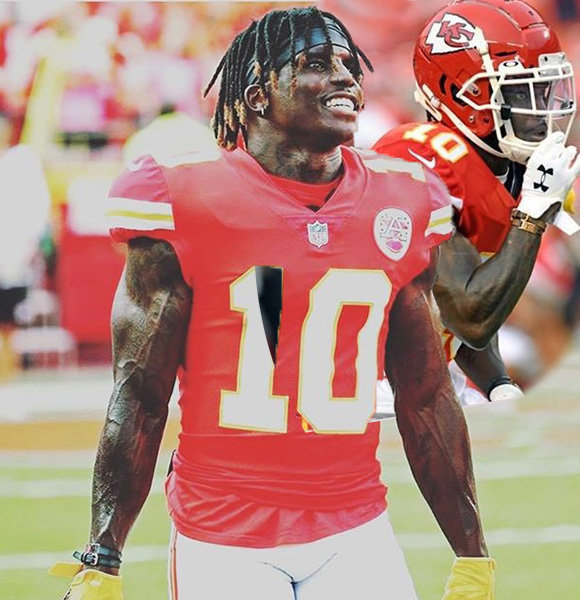 Wide receiver for the Kansas City Chiefs Tyreek Hill was let go by teams following his arrest. What was the initial reason? Let's get to the details.

Previously since 2014, Tyreek was in a romantic relationship with his ex-girlfriend Crystal Espinal. Crystal shortly went through pregnancy the same year.

When she was eight weeks pregnant, Crystal filed a case of domestic abuse against her then-partner, Tyreek Hill who was still in college at the time.

Following the case, Tyreek was then arrested on the 11th of December 2014 and was then charged with domestic assault, battery by strangulation, and felony.

As the star was in his college days playing for the Oklahoma State Football the teams decided to let him go the following day because of the accusation and his arrest. Approximately a month after, on the 21st of August 2015, Tyreek pleaded guilty to domestic abuse. He was given a 52-week batterer intervention course and was supervised for the next two years.

After three years, in August of 2018, his charges for felony domestic abuse were dismissed because he completed his probation requirements.

Following his probation completion, things between Tyreek and Crystal started to get better. Therefore, in December of 2019, Tyreek got engaged to his fiance Crystal.

Fast forward to 5th March 2019, Tyreek was again under investigation for a report of child abuse. He allegedly abused his then-three-year-old son Zev along with Crystal. However, the case was dismissed without an arrest after three days.

Then, on the 15th of that same month, police visited his house for the second case of child abuse. Following the second investigation, both of them temporarily lost custody of their son. Zev is currently living with Crystal, evident by her Instagram posts.

Following these disturbances, the couple decided to split up. Soon after their split, in June of 2019, Crystal gave birth to their twins Nakeem and Nyla.

With a bouncy relationship with arrest and accusations, Tyreek filed a petition for a paternity test for the twins.

Crystal, in response to his case filing, filed a petition to allow Tyreek to have supervised visits, establish child support, and confirm the paternity with the Johnson County District Court. Their court case is still ongoing, and a legal decision is yet to be reached.

Amid all the accusations the star player was recruited and allowed on the NFL field again.

Born on the 1st of March 1994 in Lauderhill, Florida, the United States, Tyreek Hill is now representing Miami Dolphins as a Wide receiver in 2022.

Standing at the height of 5 feet 10 inches (1.78 meters), he's come back to the field after his arrest and surrounding speculations was through the Kansas City Chiefs. But the team had to trade their precious wide receiver to the Miami Dolphins after failing to negotiate a contract extension.

As for his educational background, he attended Pearson Elementary in Pearson, Georgia, and then went to Coffee High School. After that, He attended Garden City Community College in 2013 for his sophomore year.

Tyreek transferred to Oklahoma State University for his junior year and stayed there till his dismission in 2014. Then, he lost a year before joining the University of West Alabama in September of 2015 before declaring for the 2016 NFL Draft.

Talking about his time in the Chiefs, he was drafted into the NFL during the 2016 NFL Draft. He was the 165th pick in the 5th round of the draft for the Chiefs.

With the Chiefs, Tyreek had gone on to play 59 games in the regular season and four games in the postseason during his professional career. He has 281 receptions during this time, with an average of 14.6 receptions per game.