Valorie Curry is Married and Has a Husband! Couldn't be More Content About it

By LRU Writer | On: February 22, 2018
Valorie Curry is Married and Has a Husband! Couldn't be More Content About it Actress Valorie Curry, best known for her role Emma in The Vampire Diaries, is living as a married lady with her costar turned husband. While being in search of a soul mate, she stumbled upon her husband, and today she is living a blissful married life. Let's read more to get acquainted with a beautiful relationship with her husband. 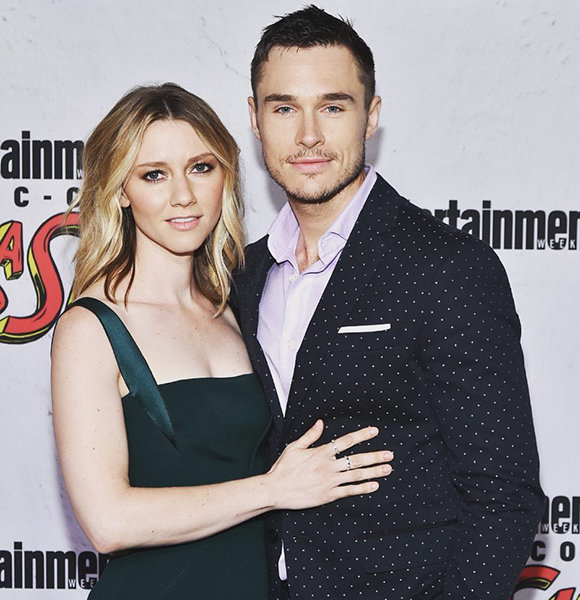 Many want their life to be a fairy tale; the tale where you fall in love, get married and live happily with your spouse till your life's end. Well, a couple blessed enough to lead such a fairy- tale is American film actress, Valorie Curry, and her partner.

Actress Valorie Curry, best known for her role Emma in The Vampire Diaries, is living as a married lady with her costar turned husband. She stumbled upon her husband while she was on a hunt for her soul mate, and today she is living a blissful married life.

Take a detailed look at their married life and get acquainted with a beautiful relationship with her husband!

Valorie curry got married to Surrey-born actor Sam Underwood back on 13 May 2016 after dating him for few years. While she was on cloud nine for getting the opportunity to work in Ewan McGregor’s directorial debut, American Pastoral released in 2016, her husband proposed her, doubling the happiness she already achieved.

The coordination between Valorie and Sam was crucial while juggling between wedding preparation and filming of the movie, but she was able to enjoy the best of both with the support of her husband.

Valorie's affirmed that her husband was very supportive at that time as he also belongs to the same profession and is a British actor.

Valorie expressed her eagerness to be with her husband Sam while sharing a picture with romantic essence back in July 2017.

Also, she shared a picture collage with her husband on her Instagram account back in December 2017 sharing her gratitude for her husband.

Although Valorie has played a role of a pregnant lady on screen but in real life, she hasn't hinted anything about having a baby with her husband. But the couple may be planning for that as well, who knows?

Valorie Curry was born in Orange County, California USA as a youngest of three children on 12 February 1986. The birth name of Valorie, who stands at the height of 5' 4" (1.63 m), is Valorie Mae Curry.

She joined Sonora High School in La Habra, California in 2004 and later got graduated with Bachelor of Art in Theater from California State University Fullerton.

While gushing about her parents, Valorie shared a picture of her father via Instagram back in December 2013, where her father is relishing reading her magazine.

Moreover, she shared her mother's picture back in December 2012 where Valorie's mother is enjoying her first Mister Softee's ice cream.

Valorie, who has great intimacy with her parents, loves experimenting with her hair as well. Back in 2012, she trimmed her long hair short and flaunted the new hairstyle via Instagram.

The experiment sure was a success, right?

Shifting the focus towards her acting career, Valorie started her screen acting by playing several roles in California State University Fullerton's theatre. She is widely known for her role as 'Emma Hill' on the Fox series The Following and her recurring role as Jane Kuhne on the UPN but is best known as Charlotte in the 2012 movie The Twilight Saga: Breaking Dawn - Part 2.

As of now, Valorie is busy with a TV series The Tick and has been involved in projects named Ophelia, Detroit: Become Human and Inherit the Viper as well.