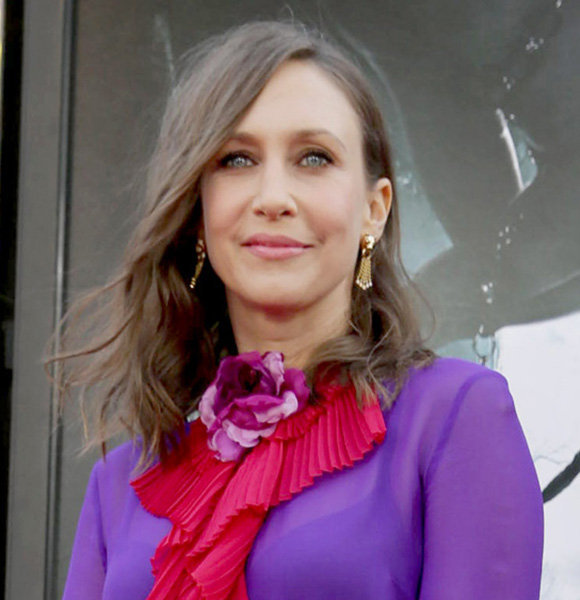 Vera Farmiga is an American actress.

Although she only learned to speak English at the age of six, she has made herself a distinguished personality in Hollywood. She is best known for her portrayal of Norma Bates in the A&E series The Bates Motel. In 2019, she starred in the Netflix mini-series When They See Us.

In the year 1996, Vera was in an affair with a French actor, Sebastian Roche. The duo got married - after a year of dating - in 1997. However, Vera ended her relationship with Sebastian after eight years of marriage. They divorced in 2005.

After trial and error, Vera found the love of her life, musician, songwriter, and film producer, Renn Hawkey. Vera Farmiga with her husband, Renn at the red carpet for The conjuring 2 (Photo: Dailymail.co.uk)

The duo met on the set of Touching Evil, through a mutual friend, Allen Hughes in 2004. After four years of dating and getting to know each other, they married on 13 September 2008.

Vera was born as Vera Ann Farmiga on the 6th of August, 1973, in Clifton, New Jersey. She was born to Ukrainian parents, mother Luba (Spas), and father, Michael Farmiga.

Another Ukrainian In Our Vault:- Beautiful Model Daria Werbowy's Dating: Left Modelling for her Boyfriend?

Talking about her siblings, she has a handful of them. She is the second among seven children; her only older brother is Victor, and younger brothers and sisters are, Alexander, Nadia, Stephan, Laryssa, and Taissa. Interestingly the age gap between her and her youngest sister, Taissa, is 21 years.

Vera started her career in 1997, with the role of Catlin in the TV series Roar. She made her first movie appearance a year later in 1998 with Return to the Paradise playing as Kerrie.

Since then, she has successfully made herself a prominent force in the industry.

She has acted in a long list of titles including Dummy, Down to the Bone, Mind the Gap, The Hard Easy, Joshua, Nothing But the Truth, Orphan, Source Code, Higher Ground, Safe House, The Conjuring, The Judge and many others.

However, her most notable project is Up in the Air as Alex. For her leading role in the movie, she was nominated for a BAFTA Award, Academy Award, Screen Actors Guild Award, and Golden Globe Award.

American actress When They See Us The conjuring The Bates Motel