Who Is Zozibini Tunzi? Wiki & Exclusive Facts About Miss Universe 2019

By LRU Writer | On: December 09, 2019
Big news people! The Universe has a new beauty queen...68th Miss Universe was announced...South Africa's Zozibini Tunzi...ten finalists represented...was born in Tsolo, Eastern Cape...comes from a family with a strong academic background...is a true family girl... kept her love life pretty secluded...her wealth just saw a massive rise as she received...doesn’t yet have a driver’s license... 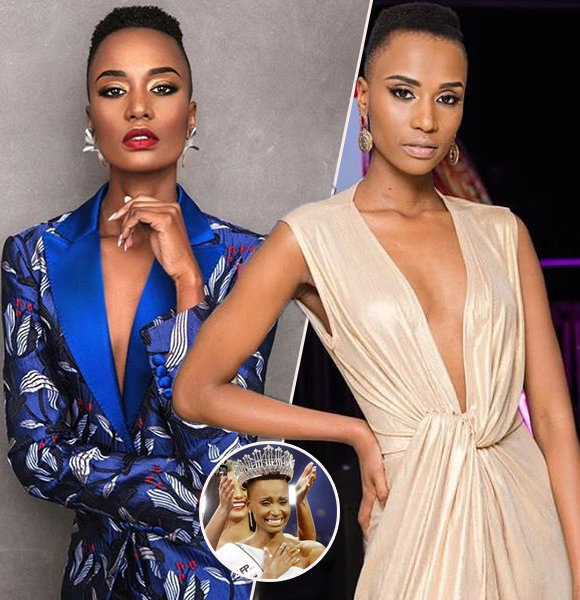 Big news, people! The universe has a new beauty queen. On 8th December 2019, the 68th Miss Universe was announced at the Tyler Perry Studios in Atlanta, Georgia.

And the one who bagged the ultimate title of Miss Universe 2019, among the ninety gorgeous women from across the corners of the universe, is South Africa's Zozibini Tunzi.

On day big day of Miss Universe finale, ninety contestants were narrowed down to twenty semi-finalists, and a panel of seven intellectual women decided which of the semifinalists best represented the pageant's motto- Confidently Beautiful. Read on for more details about the Miss Universe 2019, Zozibini Tunzi.

Who Is Zozibini Tunzi? Wiki/ Age

Twenty-six years old, Tunzi was born in Tsolo, Eastern Cape. Her father Lungisa Tunzi and mother Philiswa Tunzi initially raised her and her three sisters, Yanga Tunzi, Sibabalwe Tunzi, and Ayakha Tunzi, in the home town of Sidwadweni. But later, the family moved to Cape Town and settled in the Gardens suburbs.

Zozibini comes from a family with a strong academic background. Her mother, Philiswa, is a school principal at Bangweni JSS in Bolotwa, a village in Eastern Cape. Whereas, her father works in Pretoria at the department of higher education and training.

For You:- Miss Universe Canada 2016 Winner Siera Bearchell: 5 Facts About Her Including Her Height, Weight, Parents And A Full Bio

As for her education, Zozibini was a bright student since her high school days. She has a Bachelor of Technology degree and also a graduate degree in Public Relations from the Cape Peninsula University of Technology.

Further, the new Miss Universe is a true family girl, who calls her sisters, her best friends, and her parents, her role models. Zozibini Tunzi with her younger sister Ayakha after winning the title of Miss Universe in 2019 (Photo: sowetanlive.co.za)

In fact, during her winning speech, she credited her parents for her success and thanked them for teaching her the importance of education, hard work, and discipline.

Well, after winning the title of Miss Universe, Zozibini has been a global sensation overnight. Needless to say, there are many curiosities regarding her personal life and dating affair.

However, the gorgeous lady, who is obviously not yet married, has kept her love life pretty secluded. Further, her Facebook profile also describes her relationship status as single. So, for now, we are gonna have to assume that Miss Universe is a single lady and does not have a boyfriend.