Aziz Ansari is the new "lover" boy in the town for he has found a new love!

American actor, Aziz Ansari, known for his role as Tom Haverford on the NBC series, Parks and Recreation, was seen strolling around in the  New York City holding hands with his new beau on 10 August 2018.

Aziz was spotted in Tribeca alongside his girlfriend like figure whose identity is still not known. Aziz appeared in a blue shirt with a "Lover" message written on the upper side of the left pocket at the chest.

He matched the tee with blue-grey trousers and accessorized it with black sunglasses and a back-pack. 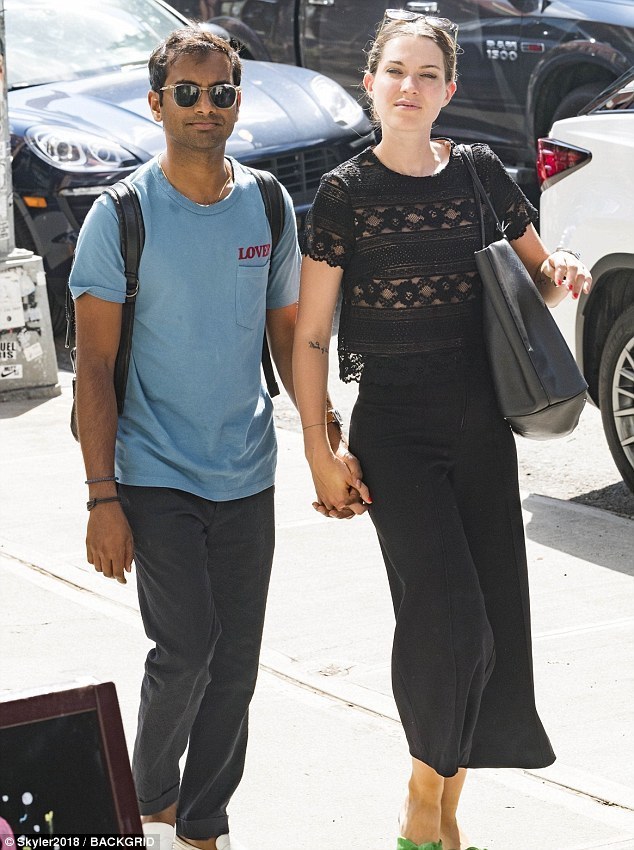 On the other hand, his possible wife wore a short-sleeved black shirt with lace. She matched the top with her lose black capri pants. She added a hint of color with her bright green sandals.

Well, with their such cozy public appearance, it look like the pair is dating, however, Aziz has not have made any statement relating to his love life.

Aziz, who is also a Master of None star, was previously involved in a relationship with chef Courtney McBroom. The couple shared a long-term romance and were almost married for the things had turned into a different way.

The couple, who met years before they started dating, were involved in a loving relationship since August 2013. Later in 2013, he joked about proposing his girl for marriage but just when his wedding news was surfacing the media, Aziz and Courtney surprised his fans with a split news instead.

Well, after being together for two years, the couple parted ways.

Apart from his love life, Aziz also faced allegations of sexual misconduct from a Brooklyn-based photographer, using the pseudonym 'Grace', back in 2017 Emmys. The woman accused him of repeatedly ignoring the cues after their date night resulting in the sexual misconduct.

Such allegations surfaced the media only after Babe publications posted an article regarding the issue. The publication even took it to Twitter posting the text messages between the woman and Aziz.

However, Aziz later issued a statement apologizing to the women while making things clear that it never was his intentions to do so. He even expressed that he “took her words to heart.”