By LRU Writer | On: February 16, 2018
Baby Bliss For Carly Waddell! Bachelor Star Gushing And Doting Over Daughter. The time could not be jollier for Carly Wadell and Evan Bass, the lovebirds from the third season of ABC's TV series, 'Bachelor in Paradise,' as they have welcomed their newly born daughter, Isabella Evelyn Bass, on 15th February 2017 at 1:58 p.m. Their bundle of joy was born weighing 6 lbs., 8 oz, measuring 18¾ inches long. 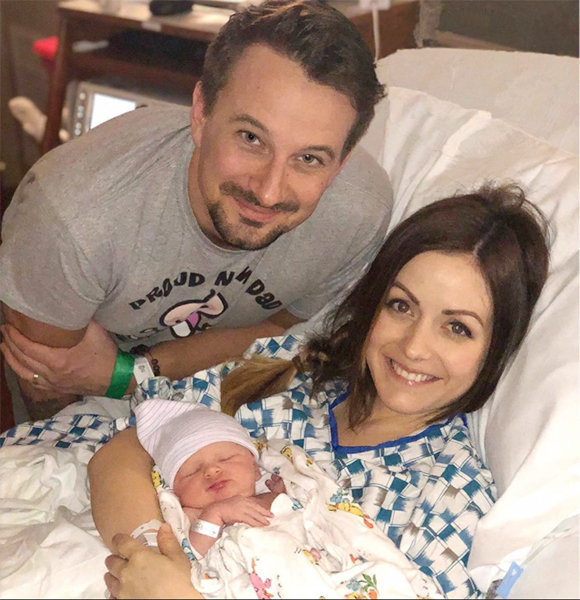 Yet another baby bliss!

The time could not be jollier for Carly Wadell and Evan Bass, the lovebirds from the third season of ABC's TV series, 'Bachelor in Paradise,' as they have welcomed their newly born daughter, Isabella Evelyn Bass, on 15th February 2017 at 1:58 p.m.

Carly took the delivery news to her Instagram uploading an adorable picture with her husband and their baby daughter. She captioned the photo, revealing that there were no complications during the birth and also mentioned that she is high over the moon with happiness.

We are so happy to announce the birth of sweet She weighs 6lbs 8 ounces and has currently stolen her dad’s heart. The birth was amazing with no complications and I’m high over the moon with happiness â¤ï¸ also high from pain meds ?

Evan, too, exclaimed his happiness, citing that his daughter is perfect, by sharing the same image over his Instagram.

Y’all - she’s perfect. My heart is toast. Like toast with jelly cuz my dang heart is shook. I love her I love everyone I love love. Thanks for the encouraging words. (Also, hahaha can ya believe this is even happening. Who would’ve thought?!?)

Moreover, the baby father even revealed in an interview with the PEOPLE that he cried during the birth of their first child together, due to all happiness. Expressing that the whole Bass family is all jovial to have a baby daughter, Evane quoted,

"It was a perfect birth, no problems at all. We were supposed to induce her today but Carly's water broke 15 minutes before our alarm went off so Bella is setting her own birthday! Carly is recovering well and the baby has had her eyes open for hours. I cried a lot during the birth! We are smitten and cannot stop kissing, cuddling and adoring her."

Well, Isabella is the first child of Carly, wheras the fourth of Evan. He has three sons, Ensley, Nathan, Liam from his previous relationship, who will now accompany their baby sister. The Bass brothers were also there with their parents to welcome their baby sister. Carly and Bass featured together in the show 'Bachelor In Paradise' as a couple and also continued their affair after the show. The couple romantically married at a beach wedding held in Puerta Vallarta, Mexico back on 17 June 2017.

Interestingly, their wedding was officiated by the host of the same show, Chris Harrison. The snap was followed by the caption that summarized the excitement of Carly.

The birth of the little Evelyn in the Bass family has beautifully showered happiness, and without doubt, it has further enhanced the relationship between Carly and Evan.

Hopefully, we will be witnessing the couple walk down their journey together in all the coming years as well.

Stay with us for the emerging updates on Carly Waddell!