By LRU Writer | On: January 17, 2019
She said yes!... Social strategist Crystal Leigh, age 34, got engaged after she accepted the proposal of her Australian musician boyfriend-cum-fiance, Michael Clifford... Engaged during an incredibly romantic sunset on 11th January 2018, the joyous occasion also marked the couple's third anniversary... 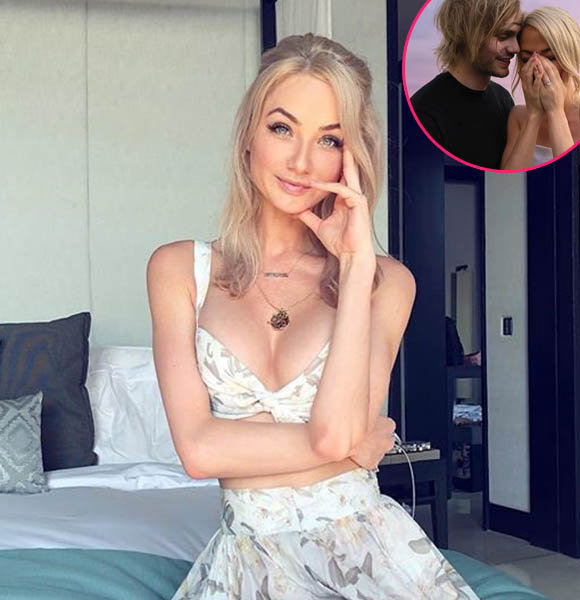 Via Instagram, her longtime partner & 5 Seconds of Summer guitarist, age 23, emphasized the importance of location as it was where "it began for" the newly-engaged duo. He then followed by writing:-

"In the last 3 years she has helped evolve and shape who I am in ways I could never have imagined. I couldn't ask for anyone better to spend the rest of my life with. I love loving you, Crystal."

Three images accompanied the Instagram caption: in the first, Crystal appears in an utter shock with happiness as she displays the engagement ring. The next photo showcases Michael down on his one knee & asking her hand in marriage. In the last picture, the newly-engaged couple lays down in a tent. The manner in which 34-year-old Instagram star and her longtime boyfriend got engaged couldn't have been more romantic. Affianced at the Ungasan Clifftop Resort in Bali Thailand with a scenic background, the location is also the same place that the smitten pair had first shared a kiss some three years earlier.

Doubling down on the romantic gesture, her fiance Michael played the 1975's record "Medicine" as the background music, a song that was spinning during their first kiss.

However, the fun didn't just end there. Later that night, Crystal - who possesses a tattoo on her ribs - and her husband-to-be enjoyed a dinner prepared by Australian celebrity chef, James Viles. The couple's friends also joined the newly-engaged duo for celebration.

In the following days leading up to the engagement, both the Instagram sensation and her rockstar fiance remained a constant fixture in each other's Instagram. During New Year's Eve celebration, the guitarist uploaded a selfie of the two and called 2019 "the best year of all our lives."

Perhaps, Michael knew all along that he & Crystal would get engaged at the very beginning of 2019.