By LRU Writer | On: August 02, 2018
The Bachelor star Erica Rose Sanders blessed with Baby No.2 which makes the family to four! The reality star, Erica Rose Sanders welcomed her first daughter with husband, Charles Sanders. Erica announced the arrival of the bundle of joy on Instagram 1 August 2018 sharing multiple photos captured in the delivery room following the birth. 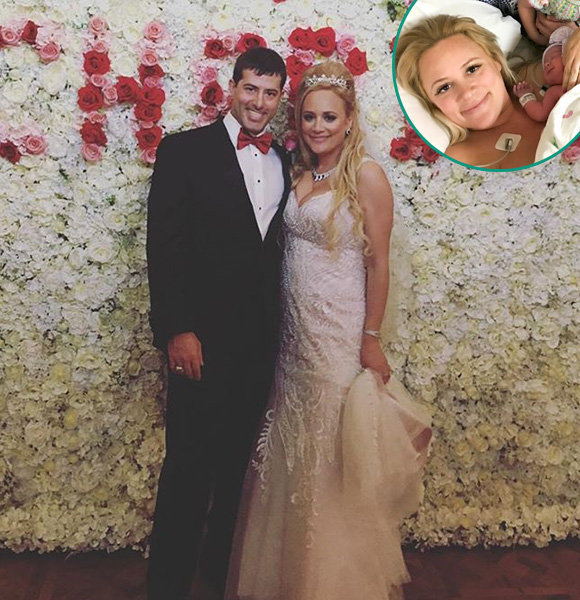 The Bachelor star Erica Rose Sanders is now the mother of two after being blessed with Baby No.2!

“Welcome to the world Aspen Rose Sanders. We love you so much,” wrote the new mom of two. “Our family already feels more complete. #babygirl #sisters #girlmom #newborn.” The newly born child is the second daughter but is first with the husband Charles, whom she got married in a lavish wedding ceremony in Texas in December 2017.

Peak On Their Wedding day:- Erica Rose From The Bachelor Is Married! Wedding Bells Have Finally Rung For Her

She shares a 23-months-old daughter, Holland with her lawyer ex-fiance Galen Gentry. The former couple named their first daughter after Erica’s late aunt Holly, who died of cancer.

Erica, who competed on season 9 of The Bachelor, announced her pregnancy on Instagram 22 March 2018, where the then-expecting mother placed her hand over her baby bump while her daughter Holland Rose Madeleine flaunted a shirt that read "Big Sis." She captioned the picture:

“So excited to announce that we will soon be a family of four!” she captioned the post. “Baby Sanders coming this August.” Well, after Erica broke up with her baby's father, Charles took Holland as his own daughter and been a responsible father. Also, the new parents got engaged on Holland's first birthday party on September 2017 at Houston Zoo.

Before proposing Erica, Charles asked the permission to toddler Holland and presented friends and family. And then, he proposed in front of all their friends and family with a pear-shaped diamond sparkler whereas he gifted the baby diamond ring to Holland.

She gushed about her husband:

"He is so amazing with Holland and it meant so much to me that he asked her permission to marry me too and presented her with her own tiny diamond ring."

The parents of two beautiful daughters have known each other since their high school, and they co-incidentally met each other at one of their family's charity events. She described that since then they have been inseparable. Also, she described that they had not spent their night apart after their first date.

Notably, the little Holland was also presented in her mother's wedding to Charles in December 2018 which she loved and enjoyed.