By LRU Writer | On: July 27, 2018
Argentine actress, Luisana Lopilato and the Canadian singer husband Michael Buble have welcomed their third child, a baby daughter. Michael's representative confirmed that the couple named their daughter.... The Casados con Hijos actress announced the arrival of their family's newest addition via... The couple, who got married back on.... also shares.... 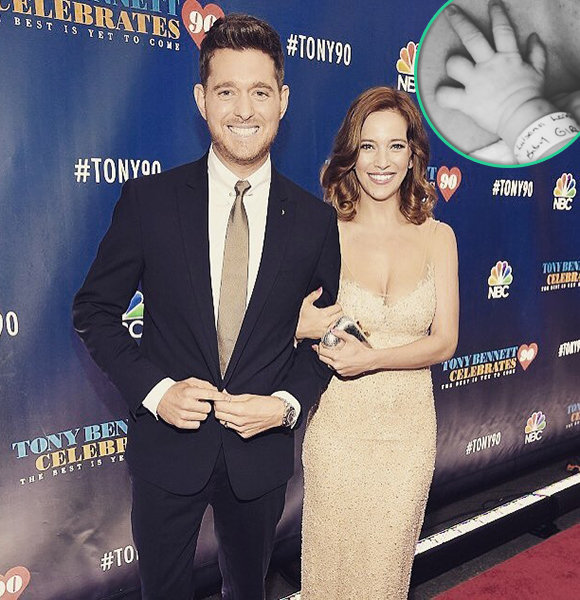 Argentine actress, Luisana Lopilato and the Canadian singer husband Michael Bublé have welcomed their third child, a baby daughter. Michael's representative confirmed that the couple named their daughter Vida Amber Betty, who was born on 25th July 2018 and weighed 6lb 1oz at the time of the birth.

The Casados con Hijos actress announced the arrival of their family's newest addition via Instagram a day later, i.e., on 26 July 2018 sharing a black-and-white photo of their newborn's tiny hand.

Sharing a glimpse of the tiny hand, she wrote:

“How to explain that our heart explodes with love? That there’s not enough hours in a day to think about it. I thank God for making us this gift of life and happiness! Because looking in her eyes is looking at heaven itself!”

The 31-year-old actress further stated in Spanish, which translates:

“We love you to infinity and beyond. We waited for you not only to grow as a family … you gave us light, hope, you are and will be our souls’ life,” The news about their newest addition aired after Michael confirmed that the family is soon to extend to five back in February 2018. While talking on Ireland's Today FM radio's The Ian Dempsey Breakfast Show back on 2 July 2018, he announced that their bundle of joy on the way would be their first girl.

“I got my first little girl coming in three weeks, and I’ve actually never said that before in public. I’ve got a daughter coming."

The couple, who got married back on 31 March 2011, also shares two sons together, Noah and Elias. The couple welcomed their first son, Noah via emergency c-section on 27 August 2013 in Vancouver.

When the couple was expecting for the first time, Michael could not hold his excitement to himself and expressed:

I had just found out [we were expecting]. It was the greatest day of my life, so I just said, ‘You know, I’m having a baby!'”

Well, the excitement about their second time expectant were not less as well. When the little family turned four on 22 January 2016, the happy father quickly took to Twitter about the birth of his second son. The Haven’t Met You Yet singer also expressed that, they had just started and would love to have more children. Talking to the People back in June 2015, he exclaimed:

“Me and my wife would really love to have three or four, five [kids], if we’re blessed to do that. And if we can’t do it naturally, then we’ll do it another way — we’ll adopt.”

Well, the couple need not go through the adoption process for their third child, as they have already welcomed their daughter naturally. With the arrival of their daughter, the worst days of their life seems to be over as the spouses of seven years had been fighting their eldest son's cancer battle together after he was diagnosed with cancer back in 2016.

But the couple, who had a second lavish wedding on 2 April 2011, disclosed about their Noah's cancer battle in June 2017, explaining to Argentinian TV host Susana Giménez how her family overcame their hurdles.