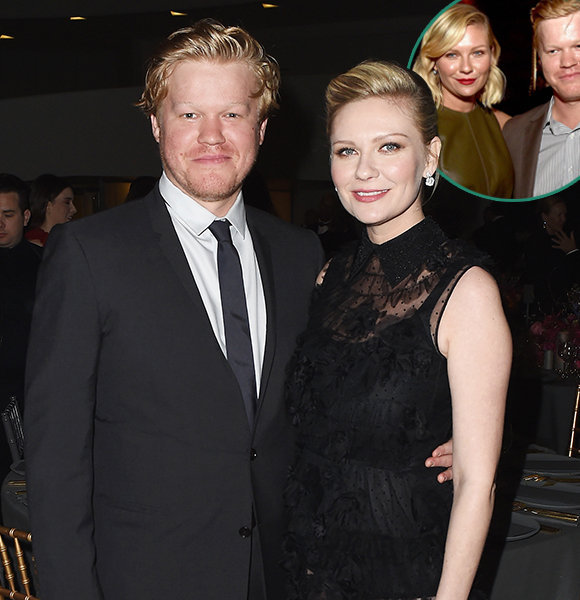 Jesse Plemons is finally a "Papa"!

American actor, Jesse Plemons welcomed his first baby boy with his fiance, Kirsten Dunst, the Spider-Man actress. The couple embraced their first-born during the weekend.

The birth of the child was confirmed by multiple sources to PEOPLE. A source there told the new-born is "a healthy baby boy." The source even added that everyone was doing great including the mother herself. The source stated,

“Everyone is doing great.”

However, there has not been any news from the couple's representatives yet. Nevertheless, Jesse and his to-be wife had remained utterly silent regarding her pregnancy. Though being pregnant, Kirsten remained private and did not publicly announced that she was expecting, so her pregnancy was just a speculation.

Later, the pregnancy announcement came in the form of a photo shoot, where Kirsten was snapped cradling her baby bump. The picture of Kristen flaunting her baby bump was released on 30 January in the Fall/Winter portrait series for Rodarte — the label co-founded by her best friends, sibling designers Laura and Kate Mulleavy.

Besides, Kristen previously admitted that she had always looked forward to having a family of her own. She even expressed that expanding her family was always on her mind.

Back in June 2017, the Bring It On star opened up with Marie Claire U.K regarding her desires to have a baby and relax while leaving work behind. Kristen stated,

Moreover, she added how she wasn't always looking out have children until she had a little one in her life. She added,

“I wasn’t one of those ‘I need a baby!’ people until my goddaughter was born. I love her so much. That love is just like … you can’t experience that unless you have a kid,”

Well, Jesse's wife is finally blessed with one.

Jesse and Kristen first met on the set of Fargo FX series's season 2. In the series, the couple played as a married couple. Soon their on-screen romance turned to be off-screen chemistry. Even after the end of the series the pair carried out being in love and began dating in 2016.

After being together for a long-time Jesse got down on one knee and popped the question to Kristen. The couple got engaged in January 2017. During that time Kristen was spotted with an engagement ring at Paris Fashion Week of 2017.

Well, the pair has no hurry in taking the marriage vows even after a year of engagement. They seem pretty chill regarding their wedding but might have hinted back in 2017 that they would tie the knot next spring.