By LRU Writer | On: January 29, 2017
Australian actress and singer Kylie Minogue and actor Joshua have put off their wedding. The reason behind this is they have delayed their marriage till same-sex marriage becomes legal in their native land Australia.

Australian actress and singer Kylie Minogue and actor Joshua have put off their wedding. The reason behind this is they have delayed their marriage till same-sex marriage becomes legal in their native land Australia.

When Joshua was interviewed by Australia’s Network Seven if they would wed in Melbourne, as they are now living in Britain, the actor told,

“There are chances of a Melbourne wedding but me and Kylie have talked about it and we are not comfortable getting married until this law has passed."

“That is something that we've talked about and decided on. Why should we? Why is it fair? Why are we more important than anyone else? It's not right and something's got to be done about it."

"I simply can't fathom on any level, whether it's moral, religious or anything, that I have the right to get married and to marry the person I love and that somebody else doesn't just because of their sexual orientation."

Kylie and Joshua were engaged in February 2016 when actor Joshua proposed her with a princess-cut diamond ring made in 1908. Kyle then said,

“For me, it’s perfect. I’m not the sort of girl who would wear a solitaire. He got exactly the right ring for me. I love it. I love wearing it and what it represents.” 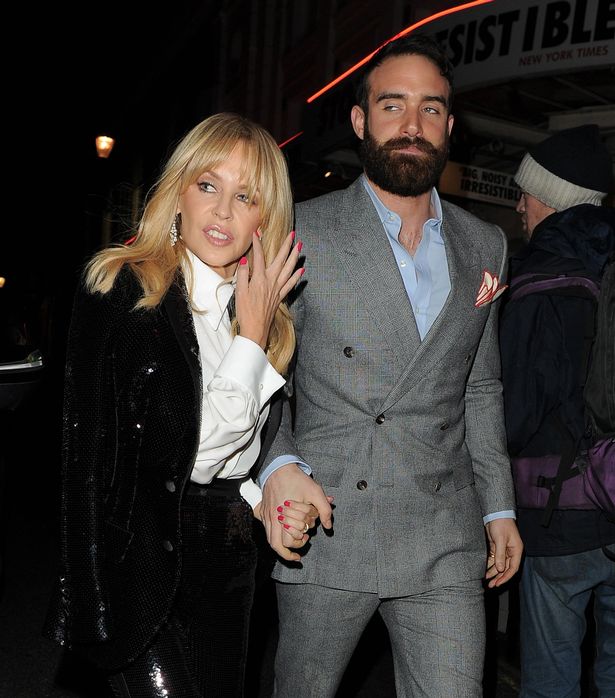 Caption: Kyle Minogue and Joshua Sasse who are already engaged have delayed their marriage.

While the pair has been enjoying their engagement, they seem to be in no rush to get married as they have not made any marriage plans yet.

Moreover, she has already decided now that she would take her husband’s surname when they will get married. She mentioned,

Kyle exclaimed what Joshua means to her as,

“When I look into Josh’s eyes, he is all I see and that makes me very happy. There’s a line in the movie Notting Hill that I always think of, when Julia Roberts is talking to High Grant, and she says, ‘I’m just a girl, standing in front of a boy, asking him to love her.’