By LRU Writer | On: August 28, 2018
A newly born actress extended the Charles' family to four! The 35-years-old performance artist, Sophie Flack and her actor husband Josh Charles welcomed a baby girl on 27 August 2018. The happiest father announced the arrival of their newborn daughter by sharing a sweet picture on Instagram on Monday, 27 August 2018. 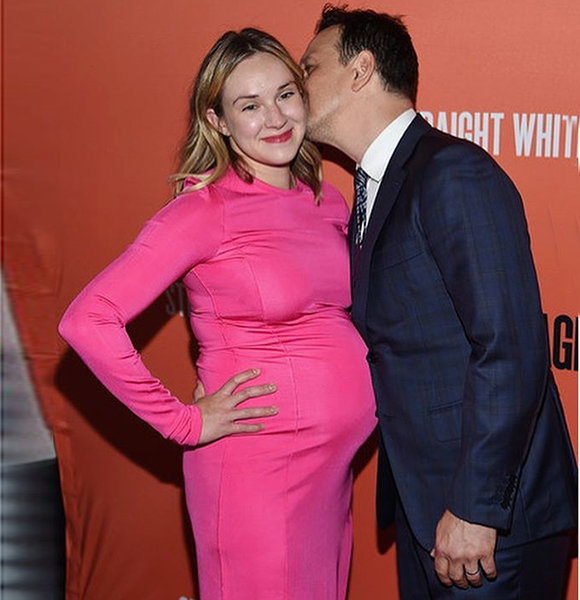 The 35-year-old performance artist and her actor husband Josh Charles welcomed their second child, a baby girl on 27 August 2018. The happy father took to Instagram to announce the arrival of their newborn daughter by sharing a sweet picture on 27 August 2018.

Announcing the arrival of his sweet angel from heaven, he wrote:

In a black-and-white photo of his daughter lying on his chest, he also expressed his gratitude towards his wife Sophie Flack writing: “Thank you @sophsf!” The couple, who have been married since September of 2013, is yet to disclose the name of their newly born child.

See Also:- Alexis Joel and Husband Billy Joel Welcome Their Second Child Together! Take a Peek at their Mesmerizing Moment

Just four days before the birth of their daughter, Charles announced the gender of his second child, stating that it would be a baby girl, posting a video of his dressing room at the Haynes Theatre which was beautifully decorated with pink-themed balloons and postcards.

The American actor aged 47, who is starring in the Broadway play Straight White Men, exclaimed that their daughter was soon to arrive:

“Our daughter timed her birth so I could make yesterday’s doubleheader. It was a day I’ll never forget

Sophie had unveiled that she was pregnant with a second child in February 2018 sharing the picture of herself wearing a black t-shirt emblazoned with the words “I woke up like this,” which was rolled up to reveal her growing baby bump. She captioned the picture, “Oh, by the way…” The loved-up couple who have been married for five years are already proud parents of 3-year-old son Rocco who was born in December 2014.

Though the parents of two beautiful children prefer to live the low-profile life,  the former New York City ballet dancer does provide updates on her personal life by sharing glimpses of her son and husband.

You May Also Like:- Baby Bliss! Sarah Stage, The Six-Pack Mom, Welcomed Her Second Child with her Husband Kris Jason

Sophie's Instagram account is filled with the adorable pictures of her son and husband. In June 2018, she shared an adorable picture of Josh kissing on Rocco's forehead which she captioned, "These two."

The happy parents are now immersed in parenting but were scared of the thought at the first time, Sophie's husband Josh, who stands at the height of 5ft 11inch, revealed his experience about how scary parenting could be stating:

“Swore I’d never be the kind of parent who continually checks their sleeping baby to make sure they’re still breathing, but apparently I am.”

The couple buoyed by their first son's presence in their life that they decided on having a second child in 2017.

Sophie and her family have been showered with congratulatory messages from her fans and followers for their newest addition in the family!