Barry Humphries And His Marriages Over The Time 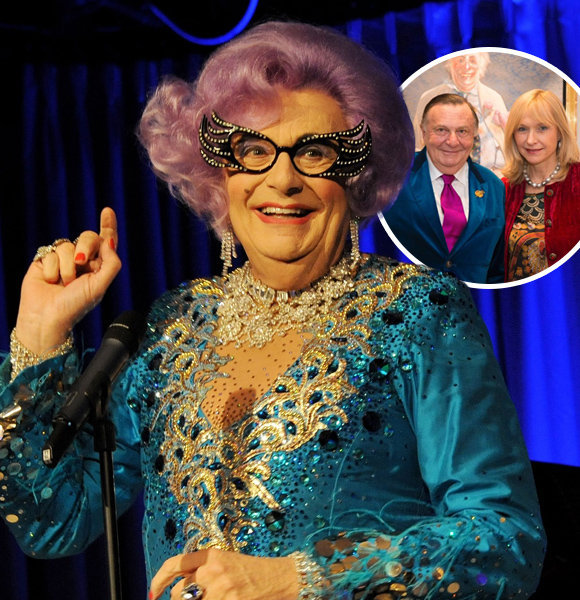 Legendary Australian actor Barry Humphries has been in the entertainment industry for a long time now. Over time, he has dated and married many women.

His married life has left fans concerned about his stability in his romantic life. As a result, many fans are constantly curious about the actor's wife.

Metaphorically, he has become the Ross of the entertainment industry. However, did he finally find his Rachel? Or does he have a family now?

After three failed marriages, Barry finally found his other half and is happily married to his fourth wife, Elizabeth Spender.

The couple has been married since 1990. As of 2022, they will be celebrating their 32nd anniversary. Not to mention his fans are very happy that Barry found his soulmate and is living a blissful life with her. Barry Humphries with His Wife Elizabeth (Source: The Times)

Talking about his spouse Elizabeth, she is the daughter of a famous poet, Stephen Spender. Moreover, she has excellent cooking skills and makes her husband happy with delicacies every day.

Looking at her Instagram posts, she is very passionate about cooking and wishes to be a professional cook. However, she has mentioned in her bio that she is a writer and a resting actress. Barry Humphries's Spouse Made Him a Birthday Dinner (Source: Instagram)

She also loves gardening as she constantly posts pictures of her grown plants and vegetables. Additionally, she has shared that she wishes to be a horse trainer in her bio.

Being the daughter of a poet, she aspires to become an incredible writer herself, and not to mention, she has her husband, Barry, by her side to support her at each step of her life.

The husband and wife are both very supportive and living their 'happily ever after.'

Before finding his other half, Humphries had been married thrice, and none of the marriages worked out. His first wife was Brenda Wright, with whom he was married for two years, from 1955 to 1957.

After that, he fell in love with Rosalind Tong, his second wife. The couple was married for 11 years, from 1959 to 1970, and during their marriage, they had two children.

The Humphries-Tong couple had two daughters named Tessa Humphries and Emily Humphries. After divorce, the ex-couple co-parented to raise their daughters.

After his second failed marriage, he got married to Diane Millstead for a decade before they split up. They married in 1979 and separated in 1989.

He has two sons, Oscar Humphries and Rupert Humphries, with his third wife.

Humphries has fathered four children from his second and third marriage. Although there isn't much information about them, they are all doing well in their lives.

His daughter, Tessa, followed her father's footsteps and became an actress. She is quite popular in the entertainment industry.

On the other hand, his son Rupert is a video-game screenwriter.

His other son from his third partner, Oscar Humphries, is a popular name as he made headlines for dropping his father's name. As a professional, he is an art dealer.

Unlike his father, he found his other half sooner and married her. She is a fellow art lover Sophie Oakley, daughter of British explorer Tom Oakley. Oscar had issues with his father for a while. The reason, however, was unknown until he declared dropping his father's name. He stated that Barry mentioned disinheriting him twice, once at lunch and next at his engagement party.

After that, he stated,

“New name, I never wanted the little bit of money anyway. Liberating after the shock. The feeling is, 'Well, I'll do it myself.' '

They have not touched much into this subject, and as of  2017, Oscar officially dropped his father's name.

Besides the talks about Australian star marriages, plenty of rumors state him as gay.

Undoubtedly, the Australian actor is not gay as he has only dated and married women in the past. However, his name has been associated with the LGBTQIA+ community after he made some transphobic comments.

Because of this, Humphries's name was removed from one of the most prestigious comedy awards. Before, the award was called Barry Award, but after the change, it is widely recognized as Melbourne International Comedy Festival Award.

Moreover, Barry has made transphobic comments in the past as well.

As of 2022, Humphries is not involved in any controversies and is living a blissful life beside his beloved wife.