By LRU Writer | On: January 24, 2021
American actor Jonathan Drew Groff, who rose to fame with his performance in the original Broadway production of Spring Awakening, took time to come out as gay in public. After his revelation things got smooth as butter. The Lancaster native openly got into a relationship with a boyfriend openly. 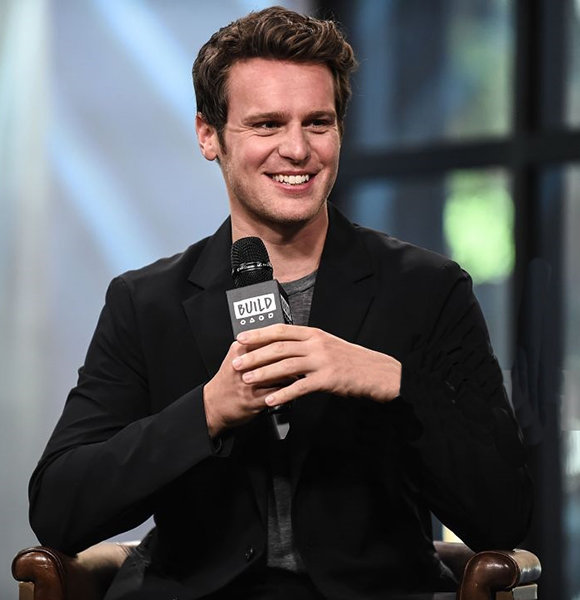 American actor Jonathan Drew Groff, who rose to fame with his performance in the original Broadway production of Spring Awakening, took time to come out as gay in public.

Unlike his expectations, things got smooth as butter for Jonathan after his revelation. The Lancaster native openly got into a relationship with a boyfriend.

Jonathan, like most gay people, was initially hesitant to reveal his identity to the world. The actor even concealed his orientation when he starred in the rock musical Spring Awakening.

After a month of wrapping the drama, Jonathan realized the necessity to walk out of the closet and find his true self. Returning home from Florence, he opened up his sexuality to his family.

Another Coming Out Story:- Lucy Spraggan & Wife A Lesbian Power Couple; A Teary Story To Bliss

At first, his parents and family members were shocked, but they eventually understood and even appreciated Jonathan. He eventually started opening to his friends and colleagues.

Later, he publicly came out from the closet marching at The National Equality March held in Washington, D.C in 2009. He quoted himself as 'gay and proud' during the parade.

After three years of coming out, Jonathan got into a dating relationship with Heroes star Zachary Quinto.

The duo got spotted together numerously before Zachary publicly announced their relationship during an interview with Out Magazine in September 2012. While gushing about his gay life, Zachary confirmed that he was indeed in a committed relationship with Jonathan.

The Star Trek star also quoted himself as "incredibly happy" and  "incredibly lucky" to be in a relationship with Jonathan.

Zachary and Jonathan even enjoyed a night out with Jonathan's best friend and Glee costar, Lea Michele. Jonathan Groff walks his dog with boyfriend Zachary Quinto and his dog back in July 2012 (Photo: dailymail.com)

Later, in July 2012, the couple was photographed taking their dogs' Skunk and Noah for a walk together. They laughed and chatted while their dogs walked around with them in LA's trendy Los Feliz neighborhood.

Everything seemed to be going on perfectly until the breakup news of Jonathan with Zachary surfaced out in the media in mid-2013. The pair ended their relationship without providing reasons for their split to the press.

Nevertheless, it came to the limelight that the pair "remained friends" even after their separation.

Jonathan talked about his ex-partner Zachary in an interview with FourTwoNine in July 2015. He also mentioned his ex Gavin Creel, whom he dated before Zachary.

Talking about his exes, Jonathan shared,

Although the low-key dating relationship of Jonathan with Zachary didn't end well, their friendship remains strong. Jonathan Groff smiles while posing with ex-boyfriend Zachary Quinto at the backstage of Hamilton in August 2015 (Photo: eonline.com)

They got spotted backstage of Jonathan's Broadway show Hamilton back in August 2015, making it clear that their split left no bad blood.

Moreover, the pair even proved that their friendship was going strong in December 2017 when they got photographed together at the 2017 GQ Men of the Year Party held at Chateau Marmont.

Who Is Jonathan Groff Dating?

While everyone was assuming Jonathan's dating status to-be-single, he was secretly dating a choreographer boyfriend.

It all started back in early 2018 when Jonathan and his mother had traveled to New Zealand. There, Jonathan had picked up a job as a teacher at the Christchurch International Musical Theatre Summer School. And that was when everything changed for him; Jonathan met his boyfriend, Corey Baker, who also happened to be a teacher there.

Who would have imagined that Jonathan would meet the love of his life at a summer school?

In the beginning, the couple had a cordial and a high school like-relationship. They would share a kiss, and Jonathan would drive home back to his mom's house.

It was much like an old school relationship which eventually paid off well in the end, as per his saying on The Late Late Show With James Corden.

Corey Baker is a filmmaker and a choreographer. He was born on 6 June 1991 in Christchurch, New Zealand. For his education, he went to a primary school in Canterbury.

He was in high school when he aspired to be a musical theater actor. Then, at the age of fifteen, he joined the International Ballet Academy (IBA) in Christchurch, leaving behind his high school. Carl Myres tutored him at the IBA.

Maid Of Honor At BFF's Wedding

While Jonathan's search for a perfect boyfriend has hit the rocks, people - friends in particular - are getting hitched left and right with their partners. Lea Michele, his best friend forever, is one of those people.

At Lea's wedding to Zandy Reich in March 2019, the openly gay actor served as the designated maid of honor. And for the most part, he looked happy for the newly-weds.

So what if his dating life isn't at its all-time high? The fact that he got signed to CAA - one of Hollywood's most revered agencies - in February 2019 should make him want to appear gleeful.

Also, in 2019, Disney revealed that Jonathan would reprise his role as Kristoff in the much-hyped sequel to blockbuster hit Frozen. Likewise, the second season of Mindhunter - a psychological thriller starring Jonathan as its lead - will likely premiere towards the latter end of 2019.