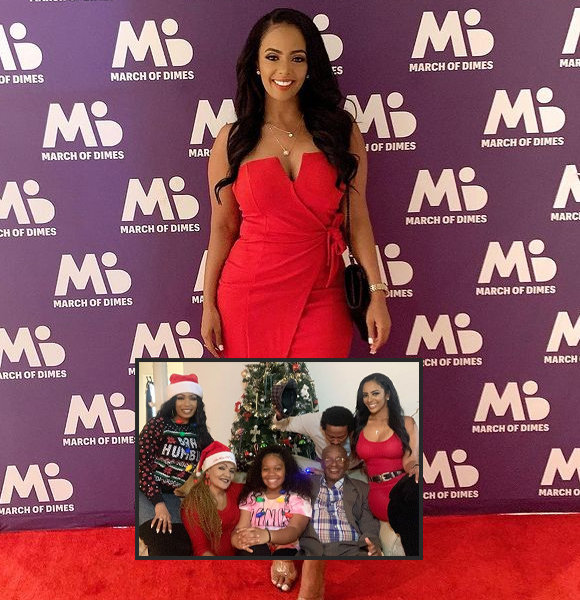 FOX 5 news anchor Feven Kay is known for her talent to captivate viewers with her amazing storytelling and coverage of breaking news, along with her captivating charm, of course.

Seeing someone this successful and charismatic usually leaves people intrigued to know if she has a special someone in her life. Maybe a husband or a boyfriend? But the way Kay has handled the media attention regarding the matter is fascinating.

Exciting, how you ask? Well, by providing no lead at all.

Yes! Key has provided nothing about her personal life at all. This has created more anticipation for her fans and people in general. However, Feven has successfully kept every detail concealed.

But surely, there are tens and thousands of suitable bachelors that are waiting to try to find love in Kay.

Feven is very much open when it comes to expressing her love to her family. Kay values the relationship with her family the most and usually posts about her parents and siblings.

By the looks of it, she has two siblings as she posted a picture from Christmas 2019 with her siblings, expressing how much she misses them. She wrote,

"â€ªI miss my family more than anything. I can’t wait until we’re together again"

Being away from family due to work commitment indeed sets a longing for them in her heart. But Kay keeps all the memories alive by posting pictures with her family during every celebration. On the occasion of her father's birthday, she made a post expressing her love for her father and credited him for all she is now. She added,

"I love you Daddy and I pray daily that God blesses us with many more years with you."

Feven also had a fair share of wonderful words to say to her mother on the occasion of her birthday. In the post, she thanked her mother for raising them to be selfless, loving, and hardworking.

And Mrs. Kay has done exactly the same. Feven is all of those. Even during the most devastating time of her life and experiencing some harsh incidents recently, she took every negativity and channeled it to come out of it with nothing but positivity.

Hard Times For The News Anchor

The news anchor was recently wrapped up in controversy after she was "allegedly" found passed out 'behind the wheel of a car,' without any garments, and 'reeking of alcohol.'

7 News reports that the police found her on March 20 in the morning.

As per police reports, Kay stated that she did not remember how she got there and when police tried to take her blood alcohol tests, she refused, but they could still notice the smell of alcohol.

As a result of which she was arrested.

Although the news surfaced later a month after the incident, stories like these spread like wildfire in this time and age, and that's exactly what happened.

She did get criticisms for the news that surfaced. However, Kay did not turn her back to either the news or the criticisms; she got along with it and addressed it head-on with an apology.

"Many of you have noticed I've' been off air for a few weeks," She wrote in response to the news of her arrest. "As I move forward, I want you to know I have learned from this and I will continue learning."

Her apology was on-air on the news portal, and soon enough, people accepted her apology and moved on from it.

More On Another FOX 5 Anchor: Anna Gilligan And Her Boyfriend-Turned-Husband Steve Lacy. Married in October 2015, Any Plans of Having Children?

An East Africa-born, her birthday falls in August. Kay's Nationality is American as she was raised in California. Her association with FOX news marks three years this year.