The Stories Behind James Hetfield's Tattoos 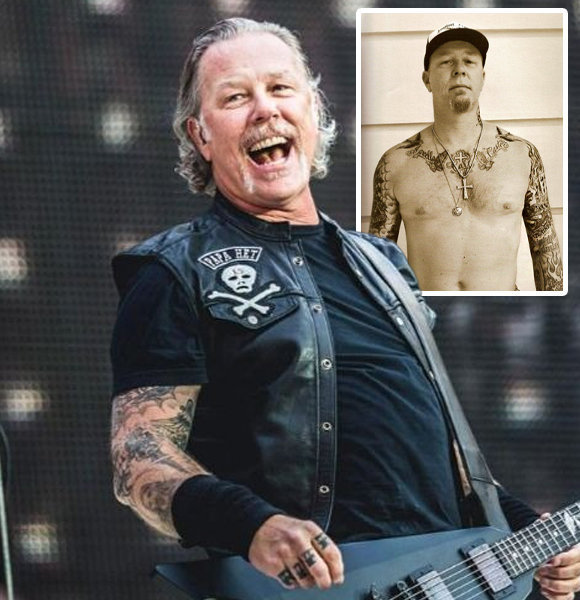 The co-founder of Metallica, James Hetfield, is one of the biggest musical sensations in the world. He is a lead vocalist, rhythm guitarist, and songwriter. Yet, he is a man who has been savoring the taste of his colossal career alongside a hefty net worth.

Apart from his astounding musical career, his tattoos have garnered immense attention from the fanbase.

The power-packed performance he delivers on stage is eye-fixating to his broad fanbase, but his tattoos also never fail to grab attention.

Tattoos have always been one of the most definitive parts of rock bands, and they tend to be a mark that narrates thousands of stories indirectly.

Likewise, James Hetfield's ink tells many stories and has a particular meaning behind them.

One of his most intriguing yet eye-fixating tattoos would be the one on his left shoulder. His shoulder is inked with four different playing cards 'A' of spade, '9' of diamonds, '6' of hearts, and '3' of clubs positioning from left to right, are vivid.

However, the meaning numbers try to express is his birth year. Moreover, the most interesting part of this tattoo is that the flames that seem to be hovering around his shoulder represent a fire accident he had on stage where he was super close to death.

Luckily, he survived. So, keeping the entire matter in check, he depicted the ink designs of flames along with his birth year.

Also, 'Carpe Diem' is one of his inks that holds prominence out of many. He has inked 'Carpe Diem' in italicized form just slightly below the flames ink.

The word comes from Latin that refers to living and enjoying every moment in the present. Another ink is the 'CBL' visible in his left arm. The letters seem casual, but they have depth behind them.

He depicted the abbreviation of his late friend Cliff Lee Burton who shone as a bass guitarist in Metallica, who passed away in 1986 due to a bus accident.

Moreover, he has inked several musical notes from the song Orion on the inner side of his left arm, showing tribute to his late friend. The dagger ink on his right bicep is another fascinating part that catches the eyes. It represents a skull that shows a person's anticipatory nature while facing challenges.

One of the most significant ink would be the one on his hand, where he's written M-81. The number refers to the year the sensational global band Metallica was formed.

The captivating singer, James, rips his shirt apart, showing his cross ink whenever he gets onto the stage. When asked about the meaning behind it, James answered with,

Symbolism is pretty big for me, and the cross for me represents balance and connection with a higher power, and you know, it can mean many things for everybody else, but tattoo wise I have St. Michael, which to me, that's pretty huge.

Facing your demons, and I love those stories. I love some of the religious stories because whether they are real or not, they are awesome inspiring stories.

Moreover, many such symbolical tattoos represent divine presence, like the High Power Eye, left upper arm inked with many stars, the palm trees, Mathews 6:13, Angel, and many more.

He depicts most of the inks of gods or angels because he feels some divine power has always saved him. He believes in how an angel has been helping him survive for so long and has been keeping him alive to this date.

His story speaks so much more from the memorable prints inked to his body.

He has lost a friend so dear to him and has faced multiple near-death experiences, but he still keeps the atmosphere intact with his conviction and grace.

James does believe in angels, but he is unaware of how millions of people depict him as an angelic figure in terms of his musical genius.

No matter how old James Hetfield gets, the contribution he has made will always hold a significant presence in people's lives. However, the 26 inks would never be enough to narrate his entire story.