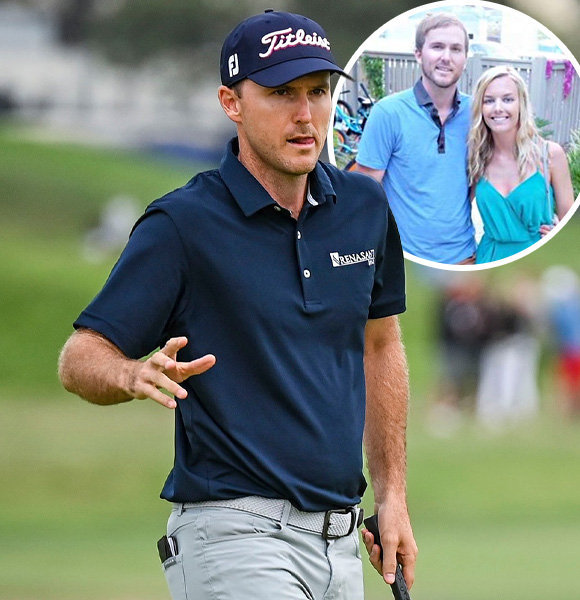 A familiar name among golf lovers, Russell Henley, is a professional golf player who has many wins and records to his name. He has achieved many milestones since his professional career debut in 2011

Apart from a thriving career, he also has an equally wonderful life with his wife and children.

Get to Know Russell Henley's Wife

Russell Henley is married to his wife, Teil Duncan. They said their vows in 2015 and have a beautiful family surrounding them.

They met two years before their wedding at another wedding itself. Russell was attending his childhood friend's wedding, who was getting married to Teil's sister.

They hit it off from there, and after ten months of dating, Russell popped the big question to his lover at the Pitt Street Bridge.

“He’s had me laughing from day one, so we’ve never struggled to have fun in mundane situations,” Teil told Charleston Weddings about the proposal. “And, most importantly, we share the same faith, which brings purpose, fulfillment, and joy to our relationship.”

Thus, their relationship blossomed into a perfect marriage. When Duncan was asked about her favorite part of the wedding, she gracefully answered, “Every moment stands out in my mind and holds a special place in my heart.”

Moreover, Russell's wife is still singing songs of appreciation for her husband. You might know that Henley is not too active on soicla media, but luckily his wife keeps us updated through her posts.

Also check out: Tony Hawk's Son Follows In His Footsteps

"Thankful for five full and wonderful years with this man," she wrote on the anniversary post, sharing a picture of the two on their wedding day.

Alongside her husband, Teil also shares endearing moments with her children. Russell has a happy bunch of four, soon turning into five, with his wife and two kids and another one on the way.

Their eldest son Robert Russell was born in 2018, and they welcomed their younger daughter, Ruth Teil Henley, a year later in 2019.

Teil also announced the exciting news of her third pregnancy via Instagram. The perfect Christmas portraits of the four would soon have a new addition as she disclosed her due date would be in June 2022 "Celebrating a great year as a family of 4, and welcoming a new baby girl in June," she wrote in the caption.

Russell might not say it that much in front of the media, but he's totally a family guy. Plus, with two toddlers and another infant on the way, he will have his hands full with dad duties.

But of course, nothing would stray him from his passion for golf. He plays on the PGA Tour and has won multiple titles over the years, his most recent one being the Shell Houston Open tournament in 2017.

On the other hand, his wife is a talented painter based in  Charleston. With such gifted genes running in the parents, it's sure to pass down to the children too.

Russell and his family are leading a life full of joy with more goodness coming their way, and we wish them nothing but the best!