By LRU Writer | On: August 26, 2019
Considered a top attacking prospect, soccer player Hirving Lozano is an exciting right winger who initially caught everyone's attention because of his footballing exploits at Dutch club PSV Eindhoven... He joined the Eredivisie side ahead of the 2017/18 season... 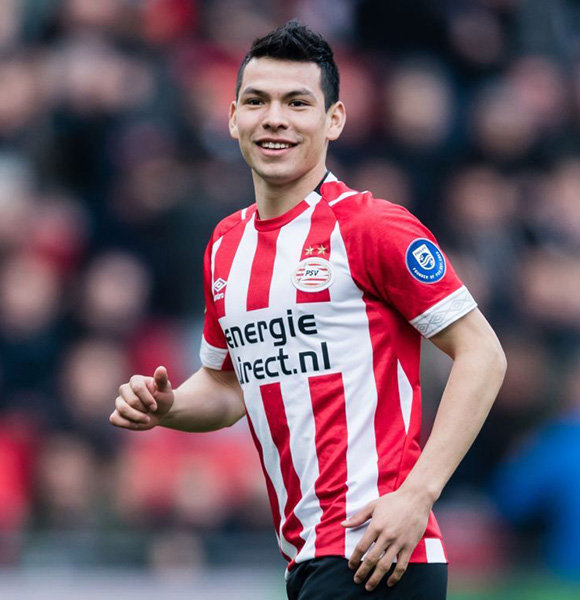 Considered a top attacking prospect, soccer player Hirving Lozano is an exciting right-winger. He initially caught everyone's attention with his footballing exploits at Dutch club PSV Eindhoven. He joined the Eredivisie side ahead of the 2017/18 season.

In the matter of two campaigns, the Mexican International went from being an aspiring soccer star to becoming one of the sought-after footballing talents in Europe.

Managed by notorious Italian super-agent Mino Raiola, Hirving was on the cusp of landing a high-profile transfer move in 2018. But, it never materialized.

Fast forward to the year 2019: the explosive winger's FIFA 19 stats saw exponential growth. So did the interest of top European clubs, vying for his much-hyped signature. In June 2019, top European outlets suggested that Hirving was holding out a $50 million deal with Seria A side Napoli. Per reports, he wished to transfer to Manchester United, a club he supported since childhood.

Fellow BPL side Tottenham Hotspur were also one of the European teams, who showed interest in signing the dazzling forward.

In the end, the Italian footballing giant Napoli was able to woo Hirving into signing with the club. Per reports, PSV Eindhoven recieved $46.5 million (including add ons) in return.

Napoli fans and soccer fanatics across the globe praised the deal. Robbie Copeland of 90Min.com went further by dubbing the news as "the signing of the summer."

With the move to Napoli, the Mexican International broke three records. In addition to becoming the Italian side's most expensive signing till date, he also got crowned Mexico's most valuable export to the soccer world.

His transfer from PSV resulted in the Eredivisie club's most lucrative sale in its history. Back in July 2017, the Dutch soccer outfit had purchased Hirving for a meager $17 million in transfer fees from C.F. Pachuca.

Playing for his current team, Hirving is set to pocket an annual salary of $3.5 million. Per reports, Napoli slapped his contract with the release clause of a staggering $151 million.

The hype surrounding Hirving wasn't born out of thin air.

Playing for his current team PSV, Hirving scored a combined total of 34 goals in the 2017/18 and 18/19 campaigns. A youth product of Mexican side C.F. Pachuca, he penned a 6-year-long contract upon his move to the Dutch club.

Per the terms set by the contract, the Mexican international would remain with his former team until June of 2023. Meanwhile, he would bag a whopping $1.2 million annually in salary. However, Hirving's move to Napoli made the initial contract obsolete.

Hirving is married to his longtime partner, Ana Obregon. He and his wife Ana tied the knot in 2014. The duo met during the soccer star's stint at C.F. Pachuca. The same year that they got married, Hirving and Ana welcomed a daughter. Three years later, the Lozano-Obregon household turned into a family of four with the arrival of a baby boy.

From North America:- Christian Pulisic Earned Another Contract With The Current Team; Secures Place In Fifa17 With Rock-Solid Stats

At five feet and ten inches (1.75 m) in height and 70 kgs weight, Hirving isn't a terrifying figure per se. But, his comparatively lighter physical stature provides him with the necessary stealth required to move past defenders.

Regarding his education, the former Pachuca player completed his schooling in his hometown of Mexico City.