By LRU Writer | On: September 05, 2019
There is always a feeling of competition amongst the automobile company and its manufacturers when it comes to the production of fast, luxurious and stunning looking cars...major factors which define if a particular car can be listed in the category of the fastest car in the world are... 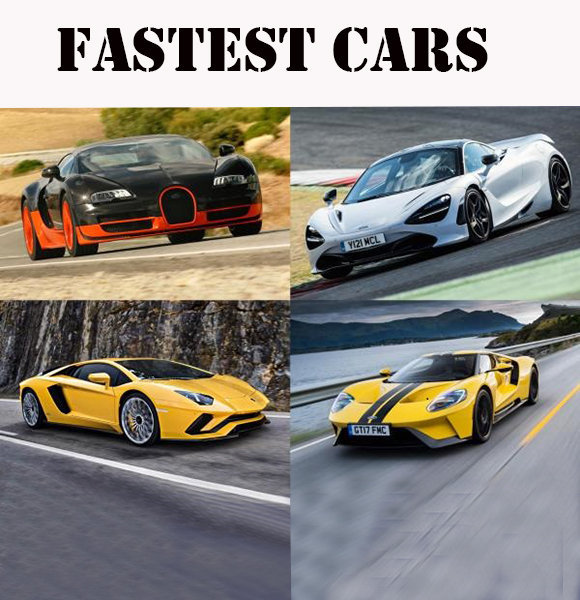 There has always been fierce competition amongst various automobile manufacturing companies when it comes to the production of fast, luxurious, and stunning cars.

Whenever the topic shifts to manufacturing supercars, the Ferrari, McLaren, and Lamborghini reserve are considered the best brands.

But, with fierce competition in the market, many new companies are on the rise and could someday top the list, leaving the significant brands behind. Some of the fastest Supercars (Photo: Liverampup.com)

Imagining a supercar at its maximum potential leads to an adrenaline rush in many.

The major factors which define a car's performance are its speed and power. A vehicle with more horsepower and maximum speed can easily surpass its competitor.

If you are interested in exploring the fastest cars in the world, continue with the list.  But, be prepared to be amazed at their performance and speed!

Leading the pack with the top speed of 304.773 mph, Bugatti Chiron claims the title of the fastest car in the world. Bugatti Chiron is the fastest car in the world (Photo: jalopnik.com)

Reaching the feet in August 2019, the new leader has a starting price of $3 million. The latest version of the car comes with an upgrade in the chassis and improved horsepower as well.

Shelby SuperCars(SSC) are right in the tail of Bugatti with the impressive Tuatara, which clocks the speeds of 300 mph. With its engine boasting 1,350 horsepower, the car rakes in at 8,800 RPM.

Built for crossing the 300-mph barrier, the speed demon price is about $2 million with its ever-reliable V8 engine.

Putting out more than 2000 horsepowers and reaching the speed of 300+ mph, the Venom costs about $1.6 million.

Built between 2011 to 2014, the Agera R costs around $1.7 million in the market. With a max speed of 273 mph, the car works with its decent 1140 horsepower engine and is adored for its eco-friendly functions.

Not far behind from its sibling Venom, the Venom GT packs a punch with a top speed of 270 mph and delivering 1,244 horsepower at the price of $1.2 million.

When it comes to fastest racing cars, Bugatti has some of the best. The Veyron Super Sport travels at a speed of 268 mph putting out 1200 horsepower.

Priced at $2.25 million, the former Guinness Land Speed record holder is not a wrong choice for smooth roads.

The fully electronic powerhouse of a car is first of its kind to make it to the list. Clocking 258 mph with impressive 1,914 horsepower, the $2 million-priced automobile is a gift to humanity.

Germany's best, the 9ff GT9-R works on 1,120 horsepower and has a top speed of 257 mph. Priced reasonably at $1 million, it is an excellent piece of machinery to possess.

Crossing the 250+ mph barrier, for a car with no gas tank is truly a remarkable feat.

Speed Up:- How To Get Into Ketosis Fast | Answer's Here

Wandering far away from its brand's standard is McLaren's Speedtail. Priced at $2.1 million and claimed the best aerodynamically perfect machine, the Speedtail reaches 250 mph top with an impressive 1,036 horsepower.

The hybrid motor technology of the Valkyrie puts out 1,130 hp at a top speed of 250 mph. Its price tag of $3.2 million is entirely justified by the car's performance in the road.

The first supercar coming out of Austria, the Milan Red reaches the max speed of 249 mph and puts out 1,306 horsepower.

Sharpen Your Mind:- Best Brain Teasers: Right Answers To These Questions Means You Are This... Looking at its built, the price of $2.1 million is justifiable for the hypercar.

The previous top-speed record holder with a top speed of 240.1 mph, the McLaren F1 is priced around $1 million brand new. The vehicle is still considered one of the best productions.

Consisting of a small punchy engine that produces 1,100 hp alongside a top speed of 233 mph, the Zenvo TS1 GT is an excellent supercar at the price range of $1.9 million.

Manufactured in 2018, the 754 horsepower driven engine clocks the top speed of 230 mph. However, the price tag of $2.5 million could sound a little costly.

Fastest Aston Martin ever built, the ONE-77 has a long way to go if it wants to reach number one in the world. The 7.3-liter V12 engine produces decent horsepower and reaches the top speed of 220 mph. Looking at its carbon fiber built, the price of $1.85 million is fair enough.

Though it is placed last in the list, the 1000 horsepower beast is one of the best Formula 1 cars with a top speed of 217 mph. Its turbocharged engine and four electric motors account for the price of $2.7 million.

Despite careful manufacture and variety of safety measures applied to the cars, it is highly dangerous to ride them without proper gears and training. Only professionals are capable of correctly handling the cars, and it is highly suggested to drive them under the supervision of experts.