Attractive Actor Xavier Samuel's Dating: Get Acquainted To His Girlfriend, Affairs And More

By LRU Writer | On: July 08, 2019
Attractive Actor Xavier Samuel's Dating: Get Acquainted to his Girlfriend, Affairs and more Xavier is an Australian actor and is one of the handsome vampire twilights has seen. Previously, he was single, but what about now? Is he still on the single side or is he dating someone?

The Twilight franchise was one of the most significant hits across the globe. This movie made lots of stars, including Robert Pattinson and Kristen Steward. But there was someone who played a role as Riley Biers in The Twilight Saga: Eclipse, Xavier Samuel.

Xavier is an Australian actor and is one of the handsome vampire twilights has seen. Previously, he was single, but what about now? Is he still single, or is he dating someone?

Xavier Samuel has managed to establish a frame and a long legion of ladies fan. But the Australian actor has failed to be struck by a single and firm relationship.

In 2016, he spoke to Daily Mail Australia before his Q&A session for his upcoming movie, "Love, and Friendship." The Aussie admitted that he was single and available, and not hesitating to date older women. Xavier, who doesn't use any social media, agreed,

"I am single, but I don’t often talk about my private life,"

Meanwhile, the handsome hunk tried to keep shut about what characteristics he was looking for his partner. But he did slip out that he wanted one with a general sense of ‘curiosity.'

Xavier even admitted that it was much fun to play the role of a younger lover in the movie. On the statement, he gave to dailymail.co.uk in July 2016, he said,

"Only in the movies... but not that I have any aversions to the idea,"

Moreover, he added that the scenario never occurred in real life.

Jessica Gomes, an international model, went public with boyfriend Xavier Samuel in October 2016. Their relationship got busted when the couple got spotted kissing in Los Angeles.

And life looked to be going accordingly for Jessica Gomes, as she spoke to The Daily Telegraph about her plans for a family. In her own words,

"I definitely want my children to know and understand Australia... "

'I really hope that when I have a family I can travel a lot with them and be able to kind of move around .I definitely want my children to know and understand Australia.

In February 2017, Xavier made an appearance at Today’s Extra show. The Twilight star revealed as to whether he plans on proposing to his then-girlfriend Jessica Gomes after she stunned on the catwalk in a bridal gown.

Insisting that the pair was content as they were, Jessica added that the two were happy and having fun.

Following two years of dating, Xavier and his girlfriend Jessica called it quits. Talking to The Daily Telegraph in May 2018, the latter confirmed the split.

Per the interview, the actor and the model broke things off in late-2018. The lovebirds, however, didn't let the public or the media know about the separation immediately.

By Jessica's admission, the split was as amicable as it can get. She also claimed to be at a much happier place despite the break-up. To those wondering, Marianna is a Scottish actress best recognized for her role on Good Dick, opposite of Jason Ritter.

Xavier had dated various other celebrities including Shermine Sharivar and Phoebe Tonkin and Emily Browning.

Emily Browning Related:- Max Irons Has A Girlfriend And He Isn't Hiding His Dating Affair; Pursued Career Despite Parent's Consent

Xavier started dating Shermine Sharivar back in 2010, but the couple split in 2011. He then commenced an affair with Phoebe Tonkin in 2011, but they broke in the same year. 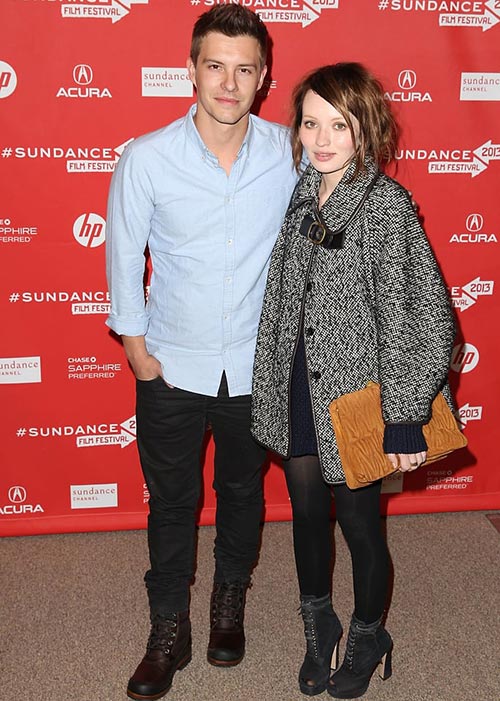 Xavier Samuel and Emily Browning at the Sundance Film Festival in 2013 (Photo: popsugar.com)

Moreover, Xavier also got seen with Emily Browning in 2012, and the couple ended their relationship in 2015. After all these relationships, fans were confident of him not being gay.