Actress Melanie Scrofano: Wondering What is Her Age? See Bio and Boyfriend, Dating

By LRU Writer | On: March 26, 2019
The Canadian beauty Melanie Scrofano, through her grace and classy attitude, has successfully gathered numerous fan followers. Through her frequent appearance in fashion week and movies she has been considered to be the successful artist.

The Canadian beauty Melanie Scrofano, through her grace and classy attitude, has successfully gathered numerous fans and followers. Through her frequent appearance in fashion week and movies, she has been considered to be a successful artist.

However, none of her fan followers were aware of her age, relationship status or about her sexual preference, until now.

So, today let's debunk her personal and professional life of Melanie!

Wondering About Her Age, Wiki, and Bio?

Even though the star looks like sweet 16, she celebrates her birthday on 31st December.

Melanie, aged 37, looks like she is in her early 30s as she has maintained her body well to have an active acting and modeling career.

Even though she was frequently seen romancing her co-stars in the series “Wynonna Earp,” in real life, she kept her married life hidden for a long time.

She started modeling at the age of 13 and was already in the acting biz by the age of 16, taking auditions and shots in Ottowa, Toronto, and Montreal. She talked about how she first got into the modeling/acting career and revealed that she didn't consider the acting profession until her modeling agency pushed her for it.

"I was only 5’7” and I was never really waify, but I have quite a personality,” says Scrofano. “My agent said, ‘So you really want to be a model, eh?’ and then submitted my name whenever casting directors were looking for models to act. It was a bit of a nudge in, and what turned out to be the right direction.”

After her first few gigs, she was quite motivated and wanted more. She was reported saying,

“I realized how much there was to acting. You could work on it forever and never become a real actor. There’s always room for improvement,” says Scrofano. “In modeling, people tell you when you’re done. And I consider [my work as an actress] so far and see it as a gratifying exercise in extremes. In acting, the possibilities for who you portray and how you portray are limitless.”

In an interview conducted by Syfy on 16th May 2016, she briefed about her likes and dislike. The actress stated that her favorite book as a kid was “The Sword of Shannara,” whereas, her hobby was making pizza. She even disclosed her weird habit of waking up and not speaking with anyone before 10 am unless it was scripted. She revealed her best city as London and her desire to express the Latin language.

In a 20-questions interview with SYFY, when asked the question ' Weirdest place you've ever made out?' she answered 'Union Station in Toronto.' So apparently it's not that she has no experience in romance and relationships.

Melanie is happily married to a man named Jeff. The couple first met each other while at high school but started dating only a few years later.

As the duo got married in a low-key wedding event, the date of their marriage is yet to be publicized. However, it's a fact that Melanie and her husband were already married by 2016.

Although Melanie often describes her husband as immature and childish, Jeff is a loyal husband and has even proven himself as an idol father. Melanie and Jeff are parents to their two sons, whose names are not disclosed to protect their privacy. 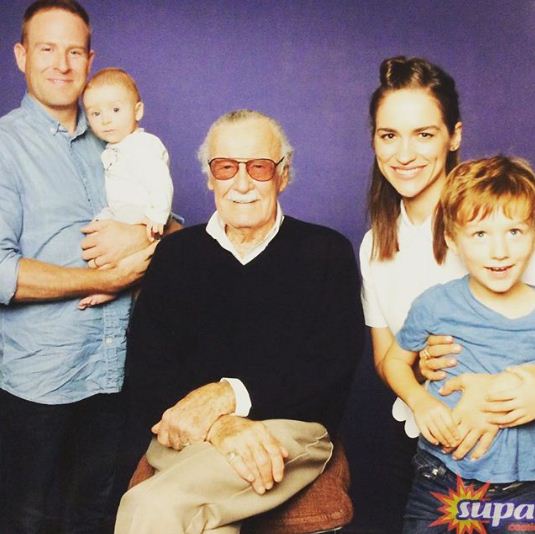 With their happy family of four, Melanie and Scrofano are maintaining a loving household while raising their children at the same time.

Melanie Scrofano was born on 31st December 1969 in Ottawa, Canada. She started her career at the age of 16 as a model. She has appeared in numerous magazines all over the world as a model.

With an average height of five feet and seven inches, she established herself as a beautiful model.

After receiving success in her modeling career, she tried her hand in the acting field. She came in the limelight after playing the role of “Rebecca” on the CBC drama-comedy series “Being Erica."

Further, in the year 2012, she was seen in the series Saving Hope, Warehouse 13, Haven, and Heartland. Currently, she is working on the television series Damien(2016) and “Wynonna Earp”(2016).In the year 2016, she has undertaken movie projects like Happily Ever After, A Sunday Kind Of Love and Birdland.

While her salary is supposedly above $50k per year, Melanie's net worth is yet to be disclosed.