By LRU Writer | On: August 05, 2019
Paris Jackson, Michael Jackson's only daughter, responded to the claims of her attempted suicide... Paris took to Twitter to call out the US-based media house for its blatant lies. In her response, she accused TMZ of being f**cking liars... 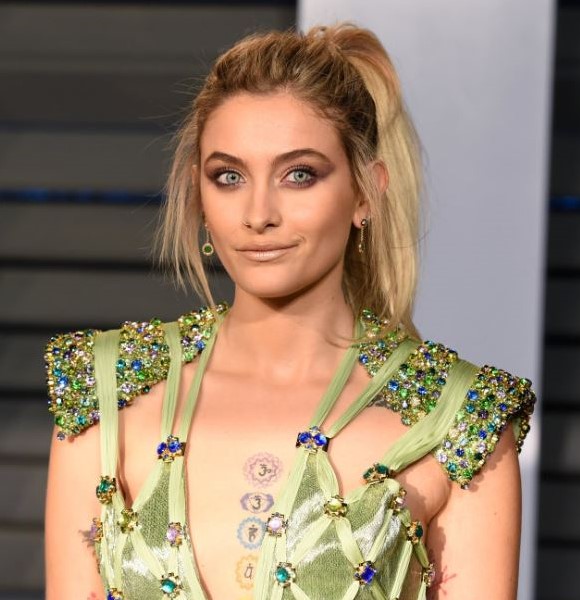 Paris Jackson, Michael Jackson's only daughter, responded to the claims of her attempted suicide. On 16th April 2019, TMZ reported that Paris sought medical attention at her LA-residence after an attempt to commit suicide by slitting the wrists.

Per TMZ, her action was a direct response to the accusations laid on her father by Wade Robson and James Safechuck in the HBO documentary titled "Leaving Neverland." Within days, Paris took to Twitter to call out the US-based media house for its blatant lies. In her response, she accused TMZ of being "f**cking liars."

Back in 2017, she told Rolling Stone that she had tried to take her own life "multiple times."

Returning to proper health in late-March 2019, Paris reunited with her mother Debbie Rowe, brother Prince Jackson, and godfather Macaulay Culkin at a concert.

More On Paris:- Was MJ Murdered? Paris Jackson Opens Up about her Father's Death in an Interview

Less than a year after her birth, Michael and Debbie - now battling cancer - parted ways.

Upon the divorce finalization, the latter handed over the custody of Paris and her two siblings - Michael Joseph Jackson Jr., Prince Michael Jackson II - to the former. Paris Jackson hugging her mother Debbie Rowe in a photo dated back to 2017 (Photo:- dailymail.co.uk)

Because of her parents' varied ethnical background, Paris, age 21, identifies as belonging to mixed ethnicity. The Beverly Hills native was 11 years old when her father passed away in 2009 at the age of 50.

To mourn the 10th anniversary of her father's death on June 2019, she boarded a flight to Paris, France. She hoped to heal from the pain of the on-going child allegation abuse against her dad.

After Michael's controversial death, Paris and her siblings inherited a multi-million fortune. Insiders claim that the 20-year-old alone garners a reported net worth of more than $100 million.

Despite living under dad's shadow all her life, Paris is finally coming to her own. Both as an actress and model, she is planning to find her foothold in the world of entertainment.

In 2018, she signed to star in fantasy two films ‘Lundon’s Bridge’ and ‘The Three Keys.' Meanwhile, she is set to make her feature movie debut in Amazon Studio’s untitled Nash Edgerton project.

Moreover, Paris also modeled for Chanel in a campaign shot at the Eiffel Tower.

Between acting and model, she is likely to see more success at the latter because of her body measurements.

At age 21, Paris is already a veteran in the dating department. Her relationships transcend nationality as well as sexuality. The aspiring model's first known boyfriend is Chester Castellaw. She and her ex-boyfriend were an item for almost nine months between April to December 2015.

After Chester, she began dating musician Michael Snoddy. The former lovebirds enjoyed a year-long romance from April 2016 to February 2017.

Following the split from musician boyfriend Michael, she ignited a brief fling with British TV personality Tom Kilbey in February 2017.

A bisexual by admission, Paris then made headlines in March 2018 for her alleged romance with a model, Cara Delvingne. Neither she nor her close friend-turned-lover has yet to comment on the rumors.

By August that same year, it was clear that she had moved on. Paparazzi caught her kissing her The Soundflower's bandmate Gabriel Glenn at the group's second-ever show. Paris Jackson enjoys a day out with her boyfriend, Gabriel Glenn (Photo:- people.com)

Seven months into dating each other, Paris and her boyfriend's relationship was at an all-time high. Gabriel, after all, was by her side throughout the March 2019 suicide debacle.

Appearing together at the premiere of Peter Butter Falcon at the Arclight in Hollywood in late-July 2019, Paris and Gabriel fueled engagement rumors. Eagle-eyed fans couldn't help notice their matching gold bands.

As media and well-wishers' anticipation grew with the possibility of the lovebirds' getting engaged, they opted not to comment on the story immediately.

Finally, some answers arrived through a source close to Paris. Shutting down the engagement rumors, the stated insider shared:-

"They are very serious but they're young and just enjoying each other’s time as girlfriend and boyfriend right now..."

The hype surrounding Paris and her boyfriend Gabriel wasn't baseless. Back in May 2019, a close source said that the duo - who play as Sound Flowers - had already exchanged promise rings.