By LRU Writer | On: December 03, 2018
Adam Conover, known for his TV show Adam Ruins Everything, has been dating his girlfriend named......The couple has been together for ... years sharing their lives as a unit......His partner revealed in an interview that she had a crush on him long before they started dating......It turns out that the pair has been maintaining a live-in-relationship...... 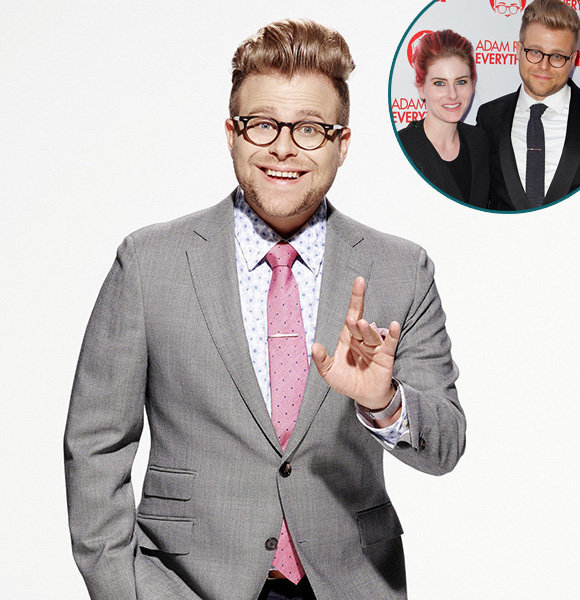 Adam Conover, an American comedian, carries a different perspective on things. While most of us take some topics and ideas in our daily life for granted without even questioning it, Adam puts his quick wit poking fun at everything and debunking the misconceptions on his TV show.

The creator, writer and the host of Adam Ruins Everything, has based his show on the CollegeHumor series. Likewise, he is also a loved stand-up comedian as well as a member of the acclaimed sketch group, Olde English.

Apart from his growing career as a comedian, Adam is blessed with a partner who is equally creative. Keeping the gay rumors at a distance, Adam shares a passionate romance with his long-time girlfriend.

While most relationships are just a tag in today's world, the love that Adam has for his long-time girlfriend is something that can hardly be quantified. With his rise to the height of success, the comedian cherishes his partner's presence in his life.

Adam has been dating Lisa Hanawalt, who is an American illustrator and cartoonist known for her contributions as a production designer and producer of BoJack Horseman, the Netflix animated series.

Adam had Lisa have been together for almost a decade sharing their life. Even though how the pair first met and fell in love is still out of the public's knowledge, their togetherness is indeed proof of their secure base.

Lisa revealed that she had a crush on Adam from watching him in comedy sketches with Raphael. She said during an interview,

“I had a crush on Adam from watching him in comedy sketches with Raphael.”

With their budding romance, the couple invested in their relationship taking it to the stage. The lovable partners have been dating for some time now and even live together. Adam and his live-in-partner moved in together after Lisa's BoJack Horseman got picked.

The pair moved to Los Angeles from New York with hopes of a new beginning in their relationship. The couple doesn't just share romance but is also each other's ultimate support. When things went differently than expected in their career, each one became a push for the other. It turns out, Adam had even rescued Lisa's draft of Coyote Doggirl from the trash.

In the beginning, Lisa had no intentions of publishing her western adventure comic Coyote Doggirl but had started it as a side project. Time and again she had put up a pause to the book but kept returning to it. At one time, she was even determined to throw it all out, but her loving man convinced her not to do so eventually turning it into one of the most loved comic books.

Looking at the bond that they share from far, the pair seems a perfect match for each other. As Adam and Lisa have always been sticking up for each other, she resembles the comedian's possible wife.

More From Liverampup: Marcia Clark Net Worth & Show, Where Is She Now? Married Status

However, there has not been any recent news of the duo exchanging the wedding vows yet. The ceremony might be around the corner for the pair, but there hasn't been any statement of the pair tying the wedding knot.