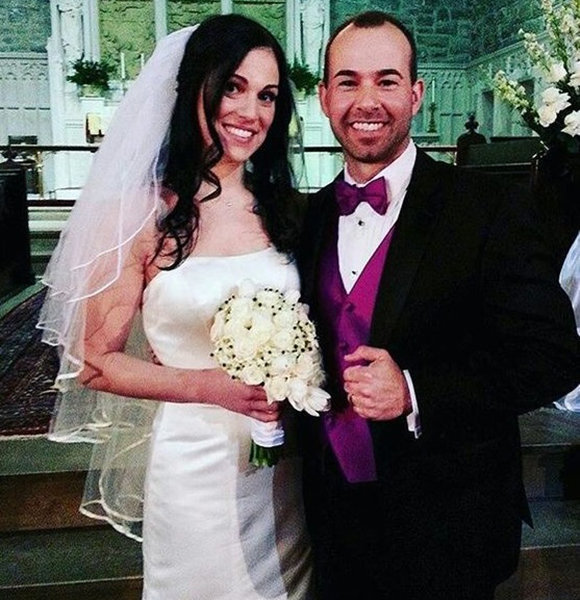 Jenna Vulcano may not be the team member of the New York comic drama troupe, Impractical Jokers, but she steals the spotlight as Sal Vulcano's sister.

With frequent appearances on the show, Impractical Jokers, Jenna sure has grabbed attention on-screen.

Her fan following grew after she got married to one of the four show members during its airing. However, her married life with the impractical joker did not last long and ended pretty soon.

Did the marriage seriously fall apart? That's a difficult question as these jokers are always into performing impractical pranks.

Well, read along to clear all of your doubts!

In 2014, Sal Vulcano's sister, Jenna Vulcano, got featured, dressed up in a perfect bridal dress with a veil as she walked down the aisle. She got married to her brother's co-star James Murray in the presence of their family members and close friends.

Even the show exhibited their wedding, capturing Jenna and James' romantic moments. Furthermore, the footage also consisted of snippets where the couple was singing an application for marriage in the City Clerk's Office. Finally, after the performance, they exchanged wedding vows and shared a sweet kiss in front of the guest. Then, after carrying out all the rituals, the pair got pronounced husband and wife.

Don't Miss:- Maura Tierney Divorced Her Husband After A Longtime; Revealed About Battle With Cancer And A Sense Of Relief Too

Among the guest, her brother Sal was blindfolded earlier before the marital ceremony. Sal was forced to watch his sister get married and not say a word regarding the matter. Even if he tried to say something, it couldn't be possible as his mouth was sealed with tape throughout the service.

However, the marriage ended just a day after the nuptial knot was tied.

It turns out the marriage was, in fact, just another prank for their fans staged by impractical jokers excluding Sal Vulcano. James married Jenna to get back at Sal, who punished James to skydive from a plane earlier.

Jenna and James exchanged the marriage vowed only as a part of their prank and annulled the union keeping it at bay a day later. James revealed the end of the marriage through a tweet.

No matter the joke, James was her husband even though it was just for a day.

Went Too Far With The Prank?

The prank's severity pulled on her brother Sal by his sister and her pretend-husband James was equal to heartbreak.

Even worse, there was always a chance of Impractical Jokers getting disbanded stemming from the tension between her brother and her fake husband.

Well, to everyone's surprise, none of the above assumptions were true; Sal and her sister are still closer than ever. And as far as the relationship between the co-stars goes, they seem to be back into each other's good graces, shooting their first-ever film and touring across the country as the part of the comedy troupe The Tenderloins.

If that wasn't enough, James and Sal, along with Mike Boccio and Joe Gatto, are set to launch a new game show.

At the age of 35, Sal and his sister Jenna were raised together by their parents, a professional poker player, mother Dianne Fernandez, and Sal Vulcano Sr. It turns out the siblings had to witness their parents' divorce at a very young age.

Despite their parent's divorce, the brother and sister are very close and love each other greatly.

Talking about Jenna's love life away from the camera and The Impractical Jokers, she prefers to keep her dating life as private as possible.

Being on the show alongside her brother did gain her exposure to the entertainment world, but it seems like she does not much prefer the media's hustle.

Her distaste for the limelight and fame gets reflected in her social media presence. At her core, a secretive individual, Jenna's last activity on Twitter was almost three and a half years back, in August of 2015. But, perhaps, Sal's sister likes to maintain mystery about herself in public.

Who Did James Murray Marry?

James Murray is officially married to Melyssa Davies, and just to be on track, this is not any prank like before.

You May Also Like:- Who Is Gerald Anderson's Girlfriend In 2018? Parents, Siblings - Details!

People exclusively announced on 26 September that the couple tied the knot on 18th September at the Lake House Inn in Bucks Country, Pennsylvania.

Following the COVID-19 restrictions, the wedding was attended by their family, friends, and the rest of the Impractical Jokers members. Sal Vulcano, Brian Quinn, and Joe Gatto officiated the wedding and also served as the best man.

Everybody had their masks on, following the safety protocols.

As for the honeymoon, the couple planned a two-week trip to Soneva Jani, a five-star resort in the Maldives.

Where Is Jenna Vulcano Now?

The last time Jenna Vulcano ever appeared in front of the media might be back in 2014 when she and Murray pulled a prank on Sal. Since then, she has not made any public appearances. Instead, she has chosen to maintain a low-key life.

Neither does she make it to the headlines, nor is she active on social media. So, it has been hard for her fans to keep up with her daily life.