By LRU Writer | On: March 02, 2021
Adam Rippon became a household name in 2018 via his performance at Winter Olympics. He helped Team USA win a bronze medal...In 2018, Adam came out of nowhere and became a pop culture phenomenon. Naturally, his dating life became a hot topic of...Interestingly, Adam and his beau chatted on-line for months before finally deciding to meet. And, in June 2018 at the Trevor Project's New York gala, the lovely gay couple... 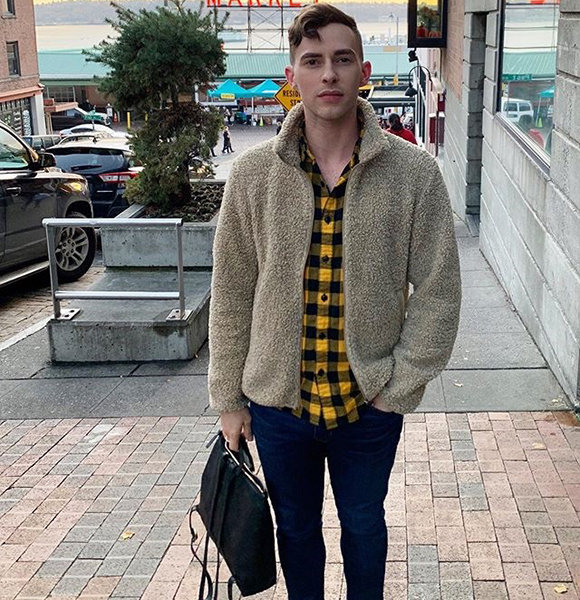 Adam Rippon became a household name in 2018 via his performance at Winter Olympics. He helped Team USA win a bronze medal and made history as the first openly gay U.S. sportsman to bring home a medal.

The winning streak didn't just end there; he managed to win hearts and emerged as the winner of the 26th season of Dancing with the Stars (DWTS).

In 2018, Adam came out of nowhere and became a pop culture phenomenon. Naturally, his dating life became a hot topic of concern among fans and media alike.

And talking about his love-life, the athlete is in a relationship with a Finland-born real estate agent, Jussi-Pekka Kajaala. The pair’s romance started in the most modern way possible; they met on Tinder, and things became serious. Interestingly, Adam and his beau chatted online for months before finally deciding to meet. And, in June 2018, at the Trevor Project's New York gala, the lovely gay couple made their official red carpet debut.

Since then, the loved-up pair have continued to flaunt their love on social media. However, their relationship is not without struggles.

In October 2018, Adam opened about being mistreated for his gay sexuality and relationship. According to the Olympian, he took a stroll holding hands with his partner when a guy abused him and ran away.

Amidst such heartbreaking incidents, Adam has continued to stay strong and flaunts his love for his boyfriend.

Previously, he was dating a mystery guy for two years. However, the athlete broke it off to concentrate on his career.

Engaged To Be Married

The skating champion announced his engagement news with his longtime partner Jussi-Pekka Kajaala via Instagram on Wednesday, 10 February 2021.

With a gallery of photos and videos of the couple, Rippo shared the story of how they got engaged in Kajaala's home in Finland.

Talking to People, Rippo exclaimed with joy, saying he is excited to marry JP because he is the best. He said:

He's kind, he's funny, and he's just as beautiful on the inside as he is on the out (which is a lot). He's my cheerleader and I'm his. I just love him a lot.

The couple could not see each other for almost all of 2020 because of the pandemic. But when he got the chance to see Kajaala in Finland, they decided to step ahead in their relationship.

During the visit, Kajaal drove him into the Finnish forest, where he [Rippo] attempted to help him shovel snow so he [Kajaal] could work on the cottage he was building.

Moreover, Rippo amused his boyfriend with jokes he wants to use in the NBC comedy series. He said:

While I was there, I would tell him about five million jokes that I would want to pitch during my 5 hour zoom meetings for our NBC comedy.

Spending two months together with jokes and shoveling eventually led them to realize they wanted to get married. However, in conversation with People, Rippo said the engagement was something they had talked about earlier, so when he was finally able to visit Finland, they felt like it would be a perfect time.

The skater's pictures suggested they exchanged gold rings and celebrated the happy moment with a bottle of champagne. On the other side, his boyfriend Kajaala shared the couple's image and joked, 'no woman, no cry.'

Adam comes from a big family, which includes his parents: Kelly and Rick Rippon, and five siblings. The Rippon family came from a conservative town in Pennsylvania. According to Adam, he didn’t know any gay person growing up. Despite the absence of an LGBT model in his life, the athlete discovered himself and came out to his mother and the whole family as a 22-year-old.

And, his brood became his support system and helped the figure skater every step of the way. Today, Adam, of height 5 feet 8 inches (1.73 m), is one of America's sought-after celebrities. His popularity has resulted in substantial monetary gains as he boasts a net worth of $4 million.

Although he retired from the Olympics in 2018, Adam has been rocking it in other aspects. In October 2019, he released his memoir titled, Beautiful on the Outside. Further, post his DWTS win, the athlete became the judge of Dancing with the Stars: Juniors.

Along with various professional outings, Adam has maintained his strong stance on LGBT rights and undoubtedly emerged as a gay role model. His voice against Vice President Mike Pence’s support of anti-gay legislation was a talked about topic in 2018.