Aiden Gallagher's Dating Life Along with His Professional Life 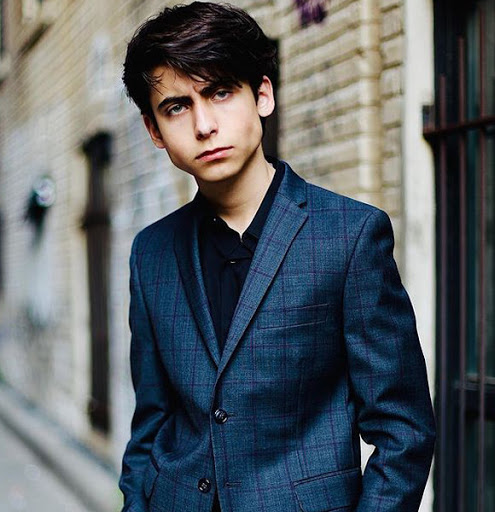 Since falling in love has no criteria, the actor, Aidan Gallagher, had once embraced himself on a romantic journey and knew no boundary when it came to publicizing his relationship and flaunting his girlfriend on social media.

If you want to know more regarding the love life of the star, then keep reading as here's all about Aidan's cute love life with his girlfriend!

Does Aidan Gallagher Have A Girlfriend?

Now single actor was not opposed to relationships; despite his mid-teens, the actor was so smitten in love that he had been flaunting his relationship with his girlfriend.

The young star started dating Hannah McCloud, the 'Revenge' actress,  in February 2017 and often shared posts regarding their relationship on social media.

Gallagher posted a collage of pictures with his girlfriend, Hannah, captioning, "Each night each day gets better and better â¤ï¸â¤ï¸," back on April 30, 2017, To mark the fifth month anniversary, back on July 10, 2017, Aidan shared cute pictures with his girlfriend Hannah, hinting that they had been together for five months. Moreover, Aidan, who preferred flaunting off his romantic connection with his girlfriend on social media, celebrated his sixth month anniversary by uploading their image on Instagram back on August 10, 2017.

Not only Aidan, but Hannah had also shared different pictures now deleted of the pair showing how happy they were in their relationship. She took Instagram to wish her boyfriend their six-month anniversary. The way the pair exhibited their love life on different social networking sites with different cute captions, their admirers had been cheering them for their adorable connection. But life had different plans for them.

Nothing remained the same for the romantic couple since late 2017, as Aidan had stopped sharing posts with his girlfriend on Instagram. A deep look at his social media handle hinted that the couple might have called it quits to their relationship. Adding more to the confirmation, Hanna has deleted all her posts with Aidan that she had shared on her Instagram.

They didn't let anyone know about their secretive breakup, but their Insta posts said it all.

After that, there was slight speculation about him having a fling with Skye Stapor, a musical artist, as they had been hanging out a couple of times. The pair were first spotted together on July 6, 2019. Then, they were seen hanging out in a mall and enjoying a rec room.

But nothing seemed exciting; They had more like a friendly relationship than that of a couple.

Since Aidan loves sharing his love life with his fans, there has been no romantic post recently.

Nowadays, his social media handle is covered with environmental issues and his career info. So the question remains, who is Aidan Gallagher dating?

Well, this is the question only Aidan can answer, but his Instagram suggests that he is single at the moment.

Apart from his romantic life, Aiden is an upcoming actor still in the making.

While growing up, Aidan discovered his interest in acting. Eventually, he started his acting career at the age of 9. 'Alec' in the popular TV series,'  Modern Family'' (2013) was Aidan's first professional role. A year later, he landed the lead role as''Nicky Harpe'' in the TV series Nicky, Ricky, Dicky & Dawn'' (2014).

Despite his tender age, the actor has worked on various projects, including Nickelodeon's ''Ho Ho Holiday Specia'' and a short film ''You & Me'' He also got nominated for theKids'' Choice Award for Favorite Male TV Star earlier in 2017.

With hard work and excellent acting skills, Aidan, who stands at the height of 1.6 m, has gained a lot of fanfares, and it seems that he certainly enjoys a net worth of $2 million through his work.

However, all of his accolades fall short when placed next to his title asUN'ss Environment Goodwill Ambassador for North America. As for his new role, Adian will focus on youth outreach.

Fellow UN Goodwill Ambassador:- Did Lucy Liu Get Married And Have A Husband? Questions Because She Is Already A Parent

He has pledged to help save the world's oceans and species from going extinct by raising awareness of critical environmental issues using his celebrity status. Aidan is also a youth champion for The Waterkeeper Alliance, WildAid, Oceanic Preservation Society (OPS), and Vulcan Productions.

He was 14 years of age when he got entrusted with his role by the UN -- thus, making him the youngest Goodwill Ambassador in the organization's history.

In less than a year since getting crowned with the title, Aidan has made his acting comeback starring as a 58-year-old man in a body of a 13-year-old teen character named Number Five on The Umbrella Academy. Since the release, the actor has been getting paid $200,000 per episode for the new season.

The series is released exclusively on Netflix; the series is a TV adaptation of the award-winning Dark Horse Comics graphic novels created by My ChemicalRomance'ss Gerard Way.

The teen actor receives a lot of media coverage and is constantly in the eyes of others; let's take a look at his family.

Aidan was born on September 18, 2003, in Los Angeles, California, USA. Although the actor, age 18, favors showing off his love life, he hasn't revealed much about his family. However, he often shares posts mentioning his mother, manifesting his love for her.

Back on May 15, 2017, the emerging star wished his mother''HappyMother'ss Da'' by sharing an old picture with his mother. To those unfamiliar with Aidan's family background: His father, Rob Gallagher, is a renowned name in Hollywood with an envious catalog. As a studio Acquisitions & Development VP, and later as a Literary Packaging Agent & a Literary Manager & Producer, Rob has developed, financed, and repackaged countless movies, garnering a wide array of guild awards as well as billions in the box office.

Looking at the actor's constant growth in the industry, keep up with us for more updates!