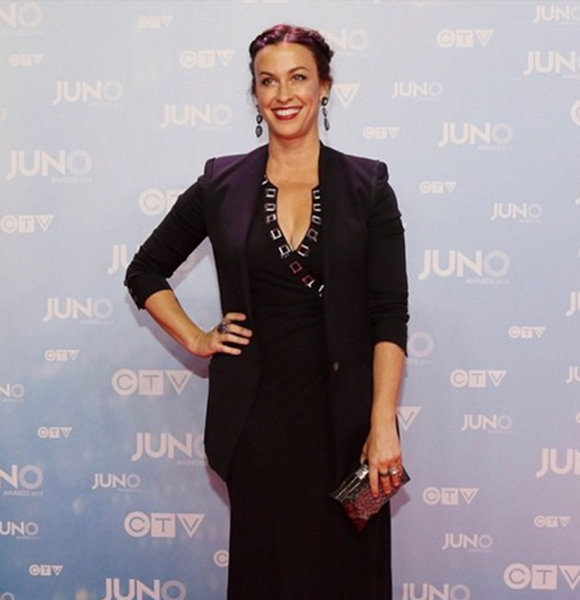 Sometimes something holy comes out of unholy things. The same stood true for the Canadian-American singer and songwriter Alanis Nadine Morissette, who got mugged in LA. In the incident, the thief ran off with her purse but luckily didn’t take the notes for her album, Jagged Little Pill, which turned out to be her ticket to success.

No doubt, Jagged Little Pill, which sold more than 33 million copies globally, put the "Canadian Debbie Gibson," on the map in the music industry. The You Oughta Know singer went on to win seven Grammy Awards and an induction into the Canadian Music Industry Hall Of Fame, over her two decades and ongoing long music career.

Further, the resume could not be more impressive as she is also a well-accomplished actress, with roles as Marisa Damia in The Price of Desire (2016), and as Sandy Stork in television series, Top Wing (2018).

The beautiful actress married twice as of 2019. The second time was the charm for Alanis, as she found American Rapper Mario ‘Souleye’ Treadway as her Mr. Right for life.

The rapper and the singer tied the marital knot in a private wedding held at their Los Angeles house on 22nd May 2010, after dating for about a year. The marriage proved to be a lifetime commitment for Alanis.

Before meeting her life-partner Mario, the singer was engaged to 2017 Hasty Pudding’s Man of The Year Ryan Reynolds in June 2004. Sadly, her relationship with the big-screen heart-throb only lasted for three years, ending the romantic endeavor in February 2007.

Indeed, Ironic singer even spoke about the breakup to the Los Angeles Times in 2008,

"I think it’s the straw that breaks the camel’s back…..  For someone who is a love addict, it’s debilitating."

The singer was deeply hurt with the breakup during the time. She also had to make some adjustments in her personal life regarding her eating disorders and lifestyle.

The Canadian superstar gave birth to his first baby boy, Ever Imre, on 2010 Christmas, after only seven months of marriage with rapper Mario. However, the couple waited another six years to have their first daughter Onyx Solace, who was born on 23rd June 2016. Further, the couple was blessed with their third child, a son named Winter Mercy Morissette-Treadway, on 8th August 2019.

Her Tour? How Much Is She Worth?

There is some excellent news for Alanis’s fans.

The Hand In My Pocket singer is back on tour with her concerts lined up for 2019. You may still catch her on 2nd December 2019 at Apollo Theater, New York, or on 7th December 2019 at Grand Theater at Foxwoods, Connecticut, before 2019 ends.

Nevertheless, while speaking about the famous singer, her fans are always eager to find out about her net worth. No doubt, her manager Jonathan Schwartz did dig some holes in her back pocket, a whopping $5 million over seven years period to be exact; Jonathan had admitted of stealing and received six years in prison.

Nonetheless, the well-recognized musical artist-actress still stands firm with an estimated net worth of $45 million as of 2019.