By LRU Writer | On: October 24, 2019
Alex Morgan is changing the world one goal at a...The US soccer star is taken as she married to her college sweetheart...The couple tied the knot in an intimate wedding... 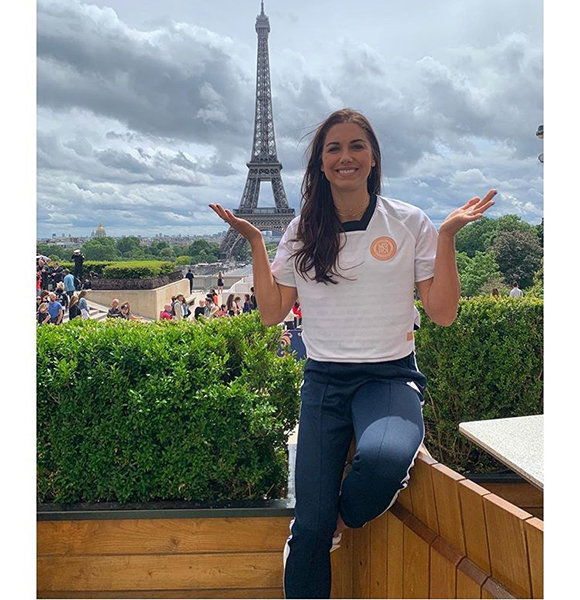 Alex Morgan was onto changing the world, one at a time. As a professional soccer player from the US national team and an unapologetic advocate for gender equality, she made a name for herself in the world.

After becoming the youngest member of the US’s female national football team in 2009, she went on to score the game-winning goal in the 2012 Summer Olympics’ semi-final match.

The bonafide athlete was one of the members of the US female soccer team, who filed a gender discrimination lawsuit against US soccer association in March 2019. The same year, she was named one of the people to be listed in the prestigious Time's 100 list.

The US soccer star is taken as she married her college sweetheart boyfriend and American soccer star, Servando Carrasco.

Alex tied the knot with her man in an intimate wedding ceremony at Rancho Dos Pueblos in Santa Barbara, California, on 31st December 2014. She met her husband at UC Berkeley. Like her, Servando is a professional soccer player, who plays for the LA Galaxy club. The soccer power couple had a unique engagement. Unlike most couple’s union, it wasn’t a complete surprise. Alex and her boyfriend had discussed the kind of ring to buy for their special occasion. One day, they went to a fireworks show and got engaged after Servando asked the soccer star to marry him.

Since then, Alex and her man gave a start to their married life despite the long-distance relationship caused by hectic schedules.

Although the pair took some time to decide on having a new one into their life, they did come to a decision finally. On 24th October 2019, Alex and her partner made the auspicious announcement of her pregnancy through her Insta handle. The pair also disclosed the gender of their baby, and guess what? It's a girl!

In her own words, the Soccer star shared,

"We are already in love and we haven't even met her yet. The newest member of the Carrasco family, coming soon,"

She also featured a picture featuring her husband, Servando. By the looks of it, they are more than eager to welcome their baby girl into the life In the picture, her hubby could be seen holding the due date of their baby while they were also seen holding baby shoes in hand.

So, it's; likely that the pair have already prepared their newborn's wardrobe.

Alex has turned her passion for soccer into a lucrative career. As a major star, she earns an annual $1 million for being part of brand deals with Secret, Coke, and Nike. So, there is a high chance that her net worth of $3 million might receive a significant boost in the coming years.

Talking about her earnings on the field, as a national soccer player, she earns an annual base salary of $72,000. While not playing for her nation, she puts on jersey number 13 for her club, Orlando Club.

Well, she is also an author with books for a young audience. She wrote New York bestseller, titled The Kicks: Saving the Team. The book was also adapted as a TV series called The Kicks for Amazon. In 2012, she released her memoir entitled Breakaway: Beyond the Goal.