Who Is Vinny Guadagnino Dating? A Look Into His Dating History

By LRU Writer | On: June 05, 2021
Jersey Shore star Vinny Guadagnino is often speculated to be a closeted gay by the fans even though he has had series of affairs with several famous personalities...Having the tag "ladies man" in his fame show Jersey Shore, Vin was quite romantic and considered a gentleman...Vinny had flaunted his "bromance" with... 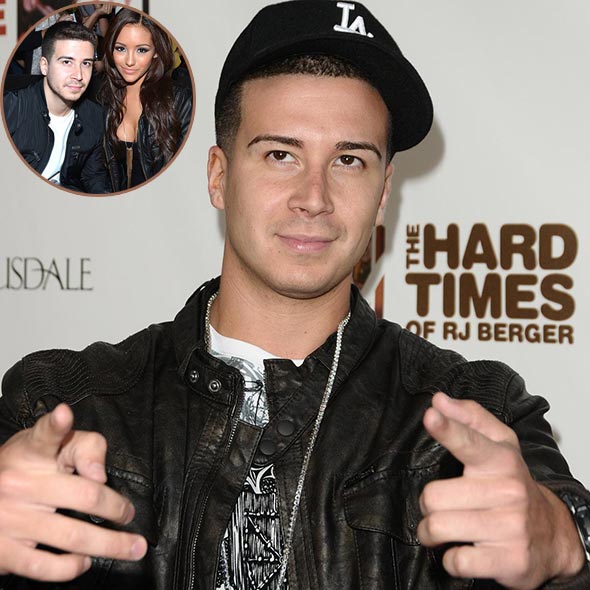 Jersey Shore star Vinny Guadagnino is often speculated to be a closeted gay by the fans even though he has had series of affairs with several famous personalities.

Having the tag "ladies man" in his fame show Jersey Shore, Vin was quite romantic and considered a gentleman. He is still in touch with his reality TV show friends and was photographed at the wedding of “JWoww's” Jenni Farley.

In an interview with eonline.com in 2016, Vinny said:-

"I'm not in touch with everybody, Some people were closer than others. I went to Jenni's wedding and I saw everybody over there.

Vinny had flaunted his "bromance" with Pauly D on MTV's Jersey Shore, and they were also considered a stand-out couple from confessionals to creeping to grabbing food at Rivoli's. The pair did everything together while they were in the MTV show.

This "bromance" gained a lot of limelight and gave rise to rumors of Vinny being gay. What was interesting to see was, he played it cool.

Vinny made funny tweets about him being gay. Tweeting from a gay bar in September 2015, the former Jersey Shore star wrote:-

Certainly, Vinny doesn't mind the rumors swirling around as his list of relationships with ladies suggests that he is straight.

Vinny dated his fellow cast Nicole “Snooki” Polizzi around 2010 and broke up a year later. Likewise, in 2010, when the Jersey Shore star was filming the second season of the reality show, he shared his romance with the brunette beauty Ramona Nitu. He first met Ramona at a nightclub in South Beach where she was a dancer. The last time we saw the couple spark romance was during the wrap of the season.

Similarly, Vinny was also linked with Angelina Pivarnick. The two always had a flirtatious relationship, but the two haven't confirmed that they were involved in a romantic relationship. As for now, Pivarnick is married to Chris Larangeira.

Further, when the Brooklyn native appeared on MTV's dating show, Double Shot at Love, she and Vin had an instant connection with Alysse Joyner. He even chose Joyner as his girlfriend in the final episode. But their relationship didn't last long as the distance became a hindrance for the couple.

Vinny and his ex-girlfriend Melanie Iglesias had a romantic relationship, which all started on their reality TV show Jersey Shore in 2011. The couple spent a romantic time together and did everything that a couple does, but this could not save their relationship. After a year of dating, their relationship ended on a hard note Twitter beef, to be exact.

Moreover, Melanie also claimed that they were never a couple and were only friends. They had officially broken up in 2014, and the main reason for their break up is considered to be Melanie's Twitter rant and Vinny cheating on her.

Following his short-lived romance with Melanie, Vinny took a break from dating and began focusing on his career.

In the spring of 2018, he started dating an Instagram model Elicea Shyann. During his relationship with his former girlfriend Elicea, Vinny remained faithful during the Jersey Shore Family Vacation.

Upon returning, Vinny reclaimed his singlehood after opening about their romance, which was already on the rocks. Even a trip to Sun-filled Miami beach couldn't rescue the waning love.

Following the split in the summer of 2018, his ex Elicea accused him of humiliating her. Her Insta posts suggested that she felt used by the reality star. In response, Vinny slammed the "haters" for implying that he cheated on Elicea.

Rumors ignited when Jersey Shore star Vinny and Too Hot To Handel star Francesca went on a dinner date in NYC in July 2020. However, the romantic date didn't come as a surprise because they had been flirting over Instagram publicly. However, they haven't made any official confirmations.

Vinny Guadagnino was born on 11 November 1987, in Staten Island in New York City, and came from a traditional Italian-American family. He graduated from the City University of New York and worked as a political aide for a New York assemblyman.

He has two sisters, Antonella Guadagnino and Mariann Guadagnino.

You May Like:- Tahiry Jose Bio, Age, Net Worth, Boyfriend