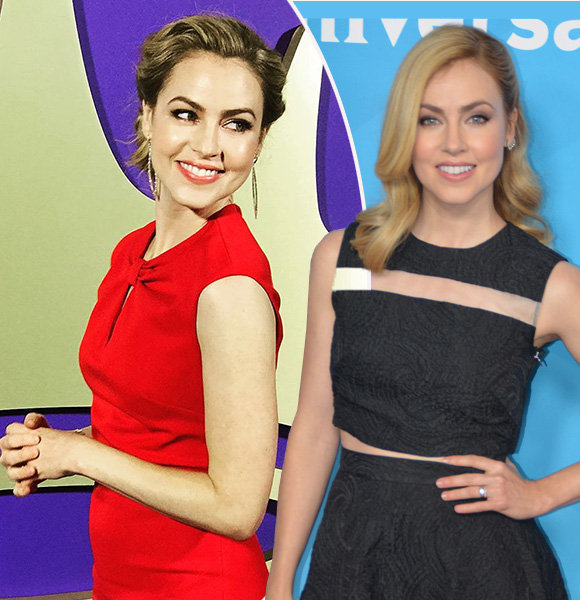 Amanda Schull is an actress known for her role in the TV show Suits. She portrayed the character of Katrina Bennett in the show for 49 episodes, from 2013 to 2019.

Apart from her career, the fandom is curious about the star's romantic life with her husband.

All in all, Amanda has 35 credits in the acting department, with six more for appearing as herself on various talk shows and documentaries.

Amanda is married to her husband, George Wilson, a graphic designer. She met her husband while she was in Australia during the shooting of the movie Mao’s Last Dancer in around 2009.

After approximately two years of meeting, Amanda married her husband, George. Their wedding was held on the 28th of May 2011. After nine years of togetherness, the family of two welcomed a new member into their life.

Besides this, not much is available about the details regarding their married life.

The couple became parents for the first time on the 25th of February 2020. On that very day, they announced the arrival of their son George Paterson Wilson VI. At his birth, he weighed  8 lbs., six oz., and measured 21 inches long.

Talking to PEOPLE, Amanda said February was now their favorite month, and for their son's nickname, they were open to any suggestions.

The daughter of a freelance interior designer and an attorney, Amanda, was born on the 26th of August 1978. Her birthplace is Honolulu, Hawaii, the United States.

Before her acting career started, Amanda was a professional ballet dancer. She worked with Ballet Hawaii and Hawaii State Ballet while living in Hawaii.

After moving to Los Angeles, the United States, she became a member of the corps de ballet with the San Francisco Ballet. This was around the late 1990s, and she was an apprentice while filming the movie Center Stage in 2000.

After six years, on the 12th of April 2006, the San Francisco Ballet announced that Amanda would retire from ballet. It was after her retirement that she pursued acting as her primary career.

Her first movie after retiring from the ballet was Women on Top, released in 2007.

Amanda stands at 5 feet 5 inches (1.65 meters). She attended and graduated from Punahou School in Honolulu, Hawaii.

She was offered a scholarship at Indiana University when she was 17. After two years, she got enrolled at the San Francisco Ballet School.

Amanda appreciates criticism; She sees it as an opportunity. She loves spending time at the Hawai beach. Not just that, she is also passionate about cleaning the surroundings clean.

She loves animals, and it is quite evident too. She advocated for pet adoption and donated to the local animal shelter. Of course, her favorite actress is three-time Academy Award winner Meryl Streep.