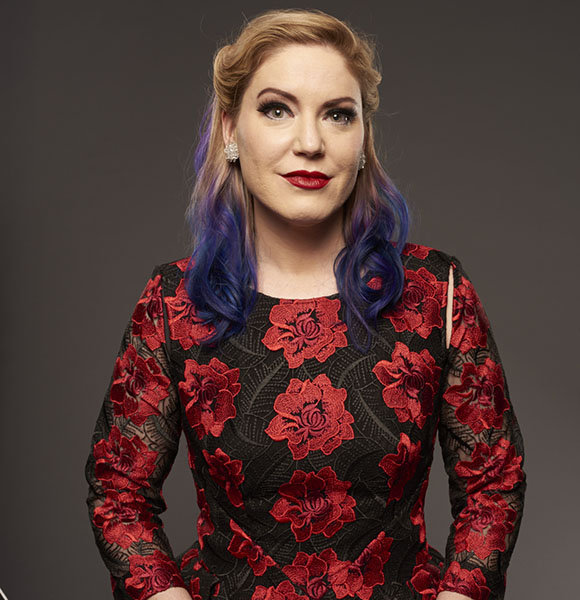 Amy Allan is a psychic medium famous for her show The Dead Files, which aired on Travel Channel. She hosted the paranormal activity investigative show (from 2011 to 2018) alongside her co-host Steve DiSchiavi for 116 episodes.

Apart from the star's successful career, the fandom is well-curious about her married life with her loving husband.

Before working in The Dead Files, she did one cinematic work. She appeared in a TV documentary, A Haunting in Georgia, in 2002.

Amy is married to producer husband, Rob Traegler. Amy announced their engagement on 30th October 2017 through a Twitter post. Amy Allan with husband Rob Traegler on their wedding day on the 31st of October 2018 (Photo: Rob Traegler's Twitter)

Then, after just more than a year, the couple got married on the 31st of October 2018. However, they didn't reveal their marriage until the 17th of November 2018. She also called her wedding day "our special day of love" in her announcement post on Twitter.

Talking about the star's partner, Rob is a director, producer, and editor. He was born on the 8th of October 1982 in Hamilton, New Jersey, the United States. The director stands at the height of 6 feet 2 inches or 1.88 meters.

Rob is primarily known for his works in unscripted television and short-form documentaries for major media companies such as Discovery, E!, Travel, Animal Planet, and the Oxygen Network.

Famed Director:- How Much Is Christopher Nolan Net Worth? Details On His Upcoming Movies

If we tune back to her past relationship and romantic life, Amy was in a relationship with Matthew Anderson. They were together for 12 years.

The former couple split up sometime around 2012. Matthew was her second husband. Amy has not revealed the identity of her first husband.

Amy Allan was born on the 31st of May 1973 in Denver, Colorado, the United States.

She has previously lived in Colorado, New York, and Arizona. Now, she lives with her husband in California.

She realized her alleged psychic abilities when she was four years old.

Amy has a degree in Psychology, Sociology, and Business. Doctor William Roll mentored her in Parapsychology.

Her areas of study are Western Massage, Zen Shiatsu, Thai Yoga, and Acupuncture. She also has an alleged ability of Psychometry.

Amy is a tattoo enthusiast. She has many tattoos on her body, including two Hello Kitty tattoos, which she considers to be a tribute to all cats.

Stay with us for more upcoming amazing updates regarding the star's amazing career and her loving relationship and successful marriage.