By LRU Writer | On: August 09, 2019
Andrew Yang quit his corporate job and decided to work in a startup...Andrew and his wife share a cute love story. They met at...The solid couple boasts two children, sons. The eldest son is... 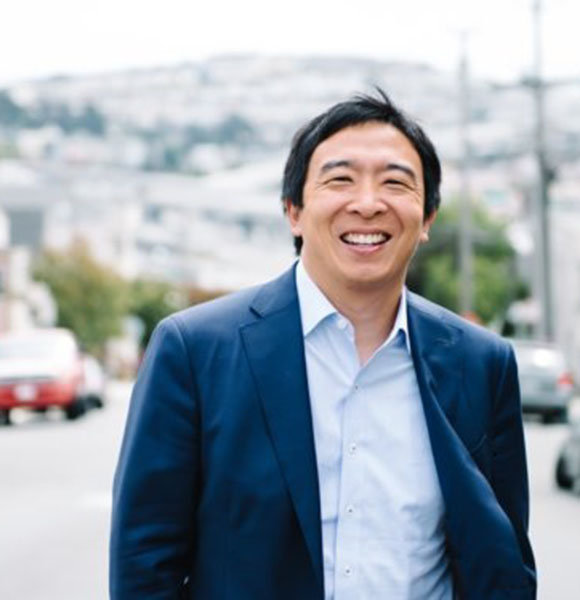 Andrew Yang quit his corporate job and decided to work in a startup. However, the company collapsed, and Andrew was left jobless with student loans.

To keep afloat, he started teaching GMAT tuition and party organization on the side. Andrew’s hustle rewarded him as he founded an education company and sold it to Kaplan in millions.

Today, he is one of the Democratic nominees for presidential race 2020.

The presidential candidate is married to Evelyn. The pair had a destination wedding on 3rd January 2011.

Andrew and his wife share a cute love story. They met at Columbia University's event when Evenly was studying there. During their initial encounters, Andrew was struggling as a GMAT teacher, trying to make it big in his career.

His wife acted as a catalyst for his sucessful entrepreneurial life. Andrew was a 30-year-old man with a sinking career. But, his lovelife and professional experience took off after Evelyn entered his life.

Interestingly, it was his wife, who suggested the politician open Venture for America- a non-profit organization that trains aspiring entrepreneurs. The solid couple now boasts a happy career and two children; sons. The eldest son is autistic. Due to the home situation, Evelyn quit her job as a marketing executive at L’Oréal to take care of her children.

Andrew is the son of immigrant parents from Taiwan.

His father Kei Hsiung Yang and mother Nancy Yang met at graduate school. Andrew’s old man holds a doctorate in Physics from UC Berkeley. Currently a researcher at IBM, he holds 69 patents to his name.

Further, his matriarch used to work as a systems administrator at a university in New York. Now, she is the president of Pastel Association of Taiwan. Nancy has won several awards for her work in arts; paintings, in her native country and Spain.

On His Career:- Andrew Yang's Policies, Net Worth In 2019, & Education

Also, the politician’s grandfather was a Geologist. No wonder, Andrew was inspired to succeed in life.

His talented family also passed on Taiwanese ethnicity to the aspiring president. Interestingly, the politician's extended family still live in Taiwan, and he visits them once a year. As for his religion, Andrew follows Protestantism.

Andrew was born on 13th January 1975 on Schenectady, New York. Courtesy of his birthday, he boasts Capricorn sunsign.

Post graduating from the Ivy League university, Andrew headed to Columbia University to pursue law and graduated with a Juris Doctorate.

However, he didn’t enjoy practicing law and started focusing on entrepreneurship. Andrew’s decision worked as he was awarded the 2015 Presidential Ambassador of Global Entrepreneurship via then-President Barack Obama.