By LRU Writer | On: September 24, 2018
The beautiful American Ninja Warrior host, Angela Sun, who loves to surf, shares the same surfing passion with her boyfriend....... Since her Instagram post is filled with the adventurous activities, her lawyer boyfriend is an outdoor enthusiast basically enjoys skier, fly-fisher, and back-packer. 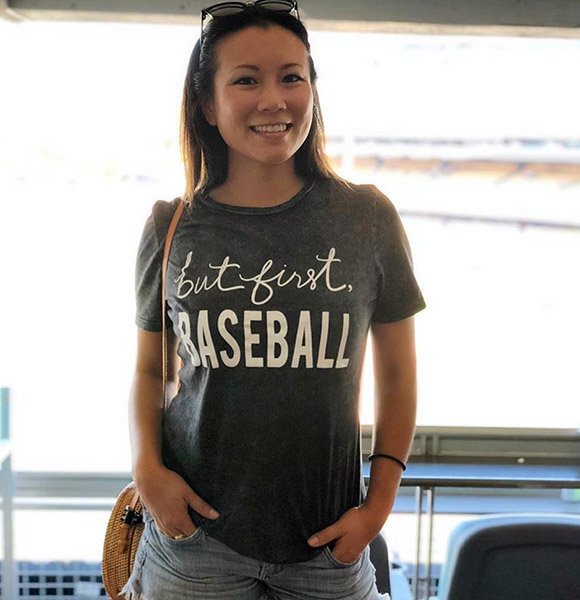 Asian-American actress Angela Sun is indulged into the profession which is similar to her passion!

She gained the worldwide fame with her hosting job, American Ninja Warrior. With her passion for the daring task ranging from the cliffing to the surfing, it seems her profession matches to her personality and inturns she seems to enjoy her task.

The Anglo Australian and Chinese ethnicity actress not only found her matching the professional job, but also found the boyfriend who shares the same passion. The couple has been flaunting their dating life since 2016, so have they thought about getting married?

The beautiful host, Angela Sun, who loves to surf, shares the same surfing passion with her boyfriend James Michael Nachtwey. Since her Instagram post is filled with the adventurous activities, her lawyer boyfriend is an outdoor enthusiast basically enjoys skier, fly-fisher, and back-packer.

He works for the Carr & Ferrell LLP as the Intellectual Property Practice Group.

See Also:- Christian Navarro Has A Girlfriend; A Dating Affair So Well-Hidden That Surfaced Gay Rumors

Since Angela's boyfriend has kept his Instagram account to private, she has shed the light on their dating life via sharing the multiple pictures with James on Instagram since 2016.

Though the Asian-American actress has not publicly spoken about her dating life, it seems the couple might have met while enjoying their shared passion for outdoor activities.

She Instagrammed the group picture from the Squaw Valley Ski Resort where tagged her boyfriend for the first time. Similarly, she shared another picture back in 24 November 2017 where the couple cheers their drink on the Thanks Giving Day. Seemingly the dating relationship which started to blossom in late 2016 is still standing like a rock in the year 2018. The adventurous loving couple again visited the Squaw Valley, probably their love flourished from this place, and shared their picture in their ski-uniform on Instagram in February 2018.

With their outdoor activities like hiking, skiing, and surfing, the couple togetherly did the Nike training which she claimed that she was laying low due to injury and she has not been able to be as active as she usually is. She shared the glimpse on Instagram in August 2018 sharing the exhausted picture with her boyfriend standing in front of the Nike's written, "Dream don't work until you do." Well, with their two years of dating bond, the pair has not yet uttered anything about marching to the married life. It seems the couple is concerned for their career holding back their wedding plans behind.

You May Also Like:- Alana Blanchard Is Reaching Relationship Goals With Boyfriend; Will Turn Dating Affair Into A Married One Anytime Soon?

The University of California graduate 38 aged host was a professional surfer during her young age. She was best at it as she was also offered sponsorship from the major brands like Roxy, Billabong, Vans and many other popular brands.

Like the surfing, her career too surfed from the sports career to the entertainment industry. Being from the sports background, she hosted ASP Surfing World Tour and EXTV's LG Action Sports Championships.

Also, she tried her hands on the journalistic profession by working as a correspondent for Fox Sports Net's 54321 and a reporter for FSN West's Dig! Volleyball Magazine show.

With her working experience in the popular shows including The Yahoo Sports Minute, 2010 Winter Olympics, she only got the recognition and fame after she joined the American Ninja Warriors. She co-hosts the show along with the Olympic Gold medalist Johny Moseley and Matt Iseman in the fourth season of the show.

American Ninja Warriors is the American version of the Japanese television series, Sasuke where the competitors compete and crossed the hardest struggle.