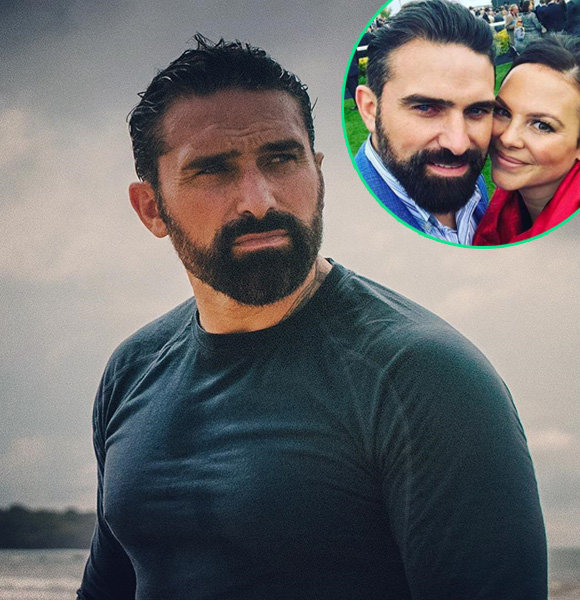 English former soldier, Anthony Middleton, who is famously known by Ant Middleton, rose to fame after appearing in the reality show, SAS: Who Dares Wins as the Chief Instructor.

Before he debuted on the telly career, he served for the nation for 13 years as being the military. While serving the nation, he never wondered concerning about the family as her wife was strong enough to look over his family and children.

Well, while his wife was at home caring for their children, Ant allegedly cheated on her with her model-fan.

Alluring life With Felicitous Wife; Only Wife Can Boss

A military veteran, ANT Middleton tied the knot with Emilie Middleton on 3 May 2006. The couple shares five children. However, some site reported that one of Ant's son is not from his relationship with his wife Emilie, but with the former relationship.

You May Also Like:- Brennan Elliott Amazed On Wedding Anniversary With Wife, Why?

Further, he has not talked about her other separate relationship with other women except his blissful journey with the wife of 12 years. Similarly, the Ant took to Instagram in May 2016 with their adorable old pictures where the couple looks too young. Along with the beautiful snap, he also wished her wife on their 10th wedding anniversary, writing: He often acclaims that his wife's support has been the great things throughout the journey of his life. He credits his wife for holding everything together while he pursued his ambitions. While he was deployed in Afghanistan tour, he did not have much time for the family.

"I used not to write home much. It’s easier to focus on what you’re doing when you’re out there. I had a selfish attitude towards what I was doing, and I was entirely selfish really."

Further, he expressed that his wife Emily has been more supportive of him. And he could not have done anything if she was not there. He added:

"I couldn’t have done it without knowing that Emilie was at home looking after the kids and holding everything else together for me.”

Despite being the well-renowned personality in the realm of military force and TV reality show, he believes that the arrival of Emilie served as the turning point of his life.

According to Ant, Emilie was the one, who encouraged him to join the Royal Marines and later became a sniper in the Special Boat Service. Ant, who resides in a three-story townhouse in Chelmsford, Essex, along with his wife Emilie and their children, also expressed his respect and love towards her wife by inking three tattoos of her. He tattooed three symbols in three different places; wrist, chest, and back.

As Ant being a veteran special Military and Reality show personality, it's apparent that he has immense female fan followers. Moreover, he had lots of marriage proposals in social media from his female fans. But, it seems she does not have a problem with his massive fan followings for as per Ant's quote, his wife is the only woman who can boss him around.

Well, Ant clearly stated that his wife is not bothered with her female fans following. And it seems he overused the trust of his wife by sharing the romantic gestures with another lady.

Also, after three days spending time with Yasmin, he tweeted a snap with wife Emilie, writing:

“To my biggest fan who has made me the man I am today, the backbone of our beautiful family. My wife.”

On the one side, he had a romantic relationship with Yasmin, and on the other side, he was making his wife 'feel like a butterfly.' Yasmin, who is from Stockton-on-Tees, County Durham, disclosed about their conversation. She said:

"He said he was going to Manchester in a few days and asked where was good for a “discreet night”. Yasmin sent him a series of steamy snaps and Ant urged her to wear a sexy outfit for him."

The item met at the Holiday Inn at Media City, Salford on 17 November 2015, which was a setup plan by Ant and also had Yasmin to walk straight in and not look at him. As per the instructions of the Ant, Yasmin did not utter a word, but when they reached the ninth floor, he snatched her and confessed about his married life.

It seems Yasmin was not known about his marriage until he came forth. Also, it appears that Ant still wants to see Yasmin again as he texted her saying:

“Definitely want to see you again.”

Well, even after Ant cheated on her wife, she stayed by her side, holding his hand and caring for the children while he was away. Ant is one lucky man as his wife forgave him and gave him another chance. According to his Instagram posts, they are very much together and more in love than ever.

All things about the cheating scandal forgotten, the SAS: Who Dares Wins star is back to his forte; adventure and thrill. In May 2018, he went on a conquest of the world’s highest peak of the world; Everest.

Even for the daredevil like him, it was a hard adventure; he nearly died due to his insufficient oxygen supply. Furthermore, he described the harrowing experience of seeing a Sherpa die on the Everest.

Nevertheless, he is taking his experiences in his stride and looking forward to his tour “Mind Over Muscle Tour “in 2019. Even near death experiences cannot stop Ant. Well, there is no stopping Ant as he became a No. 1 Sunday Times Best Selling Author for his book 'First Man In Leading From The Front'.